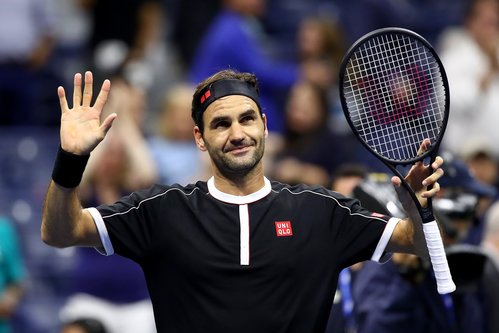 As he nears the end of a remarkable career...

As he nears the end of a remarkable career Roger Federer says he wants to play for Switzerland at the Tokyo 2020 Olympics.

The Swiss great, 38, had been undecided on competing in a fifth Games, but after an exhibition match with John Isner in Tokyo he revealed he will have another shot at one of the very few titles to have eluded him -- Olympic singles gold.

The 20-time grand slam champion won silver in London in 2012 and clinched gold with Stan Wawrinka in doubles in Beijing in 2008. He missed the Rio Games in 2016 with an injury.

'I just needed to take time to speak to my wife, my team and listen to my heart -- what did I really want to do?' he told CNN Sport's Christina Macfarlane in Tokyo, shortly after making his announcement on court after his match with Isner.

'I had to figure out the schedule with clay, grass, US Open, hard courts. I knew I always wanted to play at the Olympics but I didn't know if I could do everything because I'm not the youngest anymore and I have to pick my moments.

'But I just felt like the Olympics, I can do it and I want to do it so let's do it. I reached out to the team and said can I announce it here while I am actually in Tokyo?

'So finally I decided and I couldn't be happier and I'm super excited.'

Federer said the biggest driver was the decision of his wife Mirka and four children to join him in Japan for the Games next summer.

The Olympics runs from July 24-August 9, falling two weeks after Wimbledon and three weeks before the US Open. He also confirmed he will play the French Open in Paris ahead of Wimbledon.

'The biggest decision is always, 'Are you guys [his family] going to Japan for two weeks, or am I going to be alone for two weeks?' I don't like being alone without my family,' he said.

'I just want to be happy on the road -- we are on the road a lot -- and No.1 one concern for Mirka and myself is the kids -- we don't want to rush them all around the world. We did a lot of traveling last year so we cooled things down a little bit this year, but she was crazy excited to go back to Japan, and she knows what the Olympics means to me.'

He added: 'We met at the Olympics back in 2000 -- we kissed there for the very first time and every Olympics after that was very special and it did hurt me a lot when I missed Rio because of my knee issues in '16.'

Federer refused to get ahead of himself and start dreaming of gold, but he admitted another Olympic medal would look good on his resume.

'That's what people will say, he needs to get the gold to fill out his trophy cabinet,' he laughed. 'But not so much to me. I don't want to take pressure off myself, I can handle the pressure, it's not a problem -- I just want to give it the best shot I have and see if I can make another medal. If it's gold obviously the house comes down, it's just going to be too much, that would be crazy.

'But just being part of it is great and healthy is great and getting into the medal contention would be crazy.'

Federer will need a wildcard to be eligible to play as he has not competed in the Davis Cup for Switzerland in this Olympic cycle.

The Swiss won his last grand slam title at the Australian Open in 2018, but he reached the final of Wimbledon this year, losing in five sets to Novak Djokovic after holding two match points.