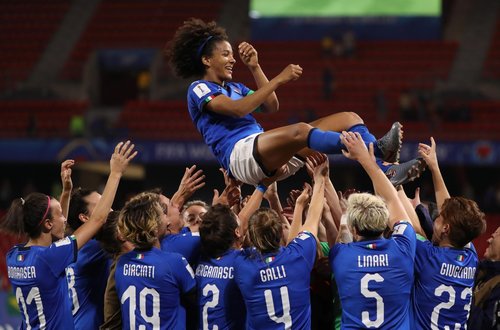 The group stages have concluded, to the knockout stages we go.After 36 games, 106 goals, 84 yellow cards, and plenty of...

The group stages have concluded, to the knockout stages we go.

After 36 games, 106 goals, 84 yellow cards, and plenty of VAR controversy, 24 teams have been whittled to 16 and the pressure now turns up a notch or two at the Women's World Cup.

The big-hitters have come through their opening tests unscathed, though there have been a few headlines along the way, while all four debutants -- Jamaica, Chile, South Africa and Scotland -- have now departed but left their mark nonetheless.

From record-breaking matches to empty seats and ferocious debates, a lot has been learned from the group stages of the Women's World Cup.

READ: The Brazil great who defied a dictatorship to play football

US still the ones to beat

Questions were being asked about defending champions the US before the start of the tournament. Was the defense solid enough? Would a squad consisting of largely the same players which floundered at the Rio Olympics be able to defend its title?

The defense hasn't yet been truly tested, but three group wins for a goal difference of +18 suggests that this is a team eager to make up for its quarterfinal elimination in Brazil, its worst showing in a major tournament.

Jill Ellis, who is aiming to become the first coach to win the Women's World Cup twice, has chosen a blend of the old and the new and over the last three years has tinkered with, rather than overhauled, the team's style of play. So far, it has worked.

For athleticism, for speed, for attacking prowess, the US is without equal. Indeed, no team has ever scored more in the group stages of this competition than the 18 goals netted by the title holders.

Ellis has a wealth of attacking talents to choose from and, as the 13-0 walloping of Thailand in the team's opening fixture proved, the US forwards are ruthless. Alex Morgan -- a record five goals in that headline-generating win over Thailand -- and Carli Lloyd already have a healthy goal tally, which is ominous for opponents.

Once the US goes into full throttle, Ellis' side could be impossible to stop.

READ: Can anyone stop the USWNT?

There are no surprises in the knockout stages. The top 10 ranked teams in the world are through -- US, Germany, England, France, Canada, Australia, Japan, Netherlands, Sweden and Brazil.

Spain, ranked 13th in the world, has made it to the last 16 for the first time and must now play the US on Monday, while China has maintained its record of having never failed to progress beyond the group stages.

Italy caused the biggest upset of the group stages by beating Australia in the final minutes of its opening group match and the reward is progress to the knockout stages for the first time since 1991.

The Italians could be the surprise outfit of the tournament and beating former finalists China does not seem out of the question. The last-16 fixtures are as follow:

The world's best top the charts

Two players top the scoring charts and their names will come as no surprise. Alex Morgan -- who, during the defeat of Thailand, became only the second American to score five in a World Cup match -- and Sam Kerr, the first Australian to score a hat-trick at a World Cup, lead the way with five goals each.

Following close behind is Brazil's Cristiane on four goals. The Brazil striker scored the first hat-trick of the tournament and became the oldest player in World Cup history to hit a treble as Brazil beat Jamaica 3-0 in Group C.

Aged 34 years and 25 days, Cristiane beat the record held by Cristiano Ronaldo, who was 33 years and 130 days old when he scored a hat-trick in Portugal's 3-3 draw with Spain at Russia 2018.

Brazil's Marta, who scored her 17th goal this week to become the most prolific scorer in World Cup finals history, has scored twice in France. A decent return considering the six-time FIFA Player of the Year was featured in just two of Brazil's three group games -- being on the pitch for a total of just 129 minutes.

The story of Jamaica's journey to the World Cup captured hearts around the world. Twice disbanded, the Reggae Girlz became the first Caribbean team to qualify for the Women's World Cup and did so thanks to the financial help of Bob Marley's daughter.

Though Jamaica leaves France without a win, the Reggae Girlz have certainly made their mark. They received a standing ovation from both Jamaican and Australian fans as they bade au revoir to the tournament following the team's final group match, which ended in a 4-1 defeat by the Matildas.

South Africa, Chile and Scotland are other debutants to exit the tournament at the group stage, but their presence in France has been to the tournament's benefit.

As South Africa captain Janine Van Wyk tweeted: 'Sometimes it's not about winning, to be seen or spoken about, sometimes it is about showing your worth & what value bring to the game with the 'NEVER SAY DIE' kind of attitude.'

Gulf exists between the elite and the rest

What Jamaica's story illustrates is that not only is there a gulf in funding between men's and women's national teams, but there is also a huge gap between the elite of women's football and the rest.

Thailand's record 13-0 defeat to the US, the heaviest in World Cup history, proves there is still much need to be done to make the tournament more competitive.

The Thai team is supported by a wealthy patron, the general manager Nualphan Lamsam, who is the chief executive of one of the country's largest insurance companies. Her tears as Thailand scored its first World Cup goal in a 5-1 defeat by Sweden showed how significant a moment that goal was for her, the team and women's football in Thailand.

Would Thailand or Jamaica have been able to compete in France without outside investment? The answer to that would be an emphatic no. That national teams rely on wealthy benefactors rather than support from their federations should compel FIFA, the sport's governing body, to do more.

US striker Morgan said after the victory over Thailand that she hoped that the 13-0 scoreline 'encourages FIFA to put a bit of pressure on those respective federations to put more efforts into their women's sides.' More investment is certainly needed. Urgently.

During the opening weeks of the tournament, a number of interesting debates have been had.

How much should a team celebrate scoring when thrashing minnows? Why don't all federations support the women's game? Also generating tweets and headlines are goalkeepers and VAR (Video Assistant Referee).

Three penalty kicks have been retaken at this summer's tournament so far after VAR ruled that goalkeepers did not have at least one part of their foot on the goal line.

While FIFA has yet to comment publicly on the penalty controversies, it is clear that officials are simply following the laws imposed by the sport's rule-making body, the International Football Association Board.

'We need to talk about this rule and the way it's impacting matches,' Hope Solo tweeted after Scotland goalkeeper Lee Alexander was penalized by the video assistant referee after her dramatic penalty save during her team's game with Argentina Wednesday.

READ: Christiane Endler -- the goalkeeper opening doors for other women

Goal dimensions have also been discussed during the opening weeks of the tournament. Player-of-the-match performances from Argentina's Vanina Correa and Chile's Christiane Endler suggest goal sizes are fine as they are.

But in a column in the English newspaper The Times, Chelsea manager Emma Hayes remarked that 'no one ever thought to question whether it makes sense' for goal sizes to be the same for both the men's and women's game.

Female goalkeepers have long been the subject of mockery by those who wish to pour scorn on the women's game, but goalkeeping standards have undoubtedly improved in recent years. But, as Katie Whyatt wrote in her column in the English newspaper the Daily Telegraph on the debate: 'We should at least have this debate, with nuance. To dismiss Hayes's suggestions out of hand does everyone a huge disservice.'

READ: The South American footballers who fought for change

A sell out is not necessarily a sell out

FIFA, the sport's governing body, has declared that ticket sales have exceeded the 1 million mark (1.3m were sold in Canada four years ago), but empty seats have been a feature of the early stages of the tournament, even in matches billed as sold-out by FIFA.

Only 13,000 people turned up to watch England versus Scotland on the opening weekend in Nice's 35,000-capacity stadium, while empty seats were visible for US versus Thailand -- one of the 14 sold out games, according to FIFA, in this 52-match competition.

FIFA told CNN Sport that vacant seats at sold out games could be attributed to no-shows.

'Generally speaking when it comes to FIFA competitions, there is always potential for a certain discrepancy between the expected attendance and the actual match attendance,' said a FIFA spokesperson. 'Such discrepancy is mainly due to 'no shows,' which can be linked to different factors such as negative weather conditions, travel constraints or the personal decisions of fans.'

With tickets available from nine euros for some matches, has the cost of not attending matches been made inconsequential? Poor promotion of the game in Paris has also been criticized, with advertising of the French Open -- which was being held in the city up until June 9 -- more prominent than a tournament being billed as a game-changer for women's sport.

If ticket sales have not been an outright success, at least the group stages have enjoyed blockbuster global television figures.

French free-to-air broadcaster TF1 has said a peak audience of more than 10 million watched France's opening match against South Korea, the most ever for a women's match in the country. At last year's World Cup in Russia, 12.6 million tuned in to watch France take on Australia in the opening game.

England versus Scotland attracted a peak audience of 6.1 million on the free-to-air broadcaster the BBC, making it the most watched women's soccer game of all time in the UK. Fox Sports has experienced a 11% rise in viewership compared to the 2015 tournament, this despite the unfavorable time zone.

In Brazil, this is the first Women's World Cup to be broadcast on the country's main TV channel, Globol, and Brazil's opening match against Jamaica averaged 19.7 million viewers. Millions have also tuned in in Italy, the Netherlands, Argentina and Germany, while in China, an average of 12 million reportedly watched the country's opening match live on CCTV.

FIFA hopes a billion tune in to watch on television but, then again, it did hope that 1.3 million tickets would be sold.