READ: Pelosi's statement on Trump's State of the Union address 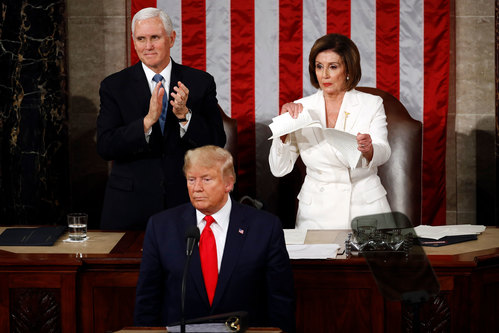 "We are always hopeful when a President makes a State of the Union address. We welcome any opportunity to extend the hand of friendship to find common ground on behalf of the American people. The issue of major concern to most Americans is health care. Tonight, House Democrats brought scores of guests to the State of the Union who have powerful health care stories, whether it is families with pre-existing conditions, families struggling to afford the prescription drugs they need, or families relying on Medicaid even though they have private insurance. We had been told the President would have a positive message on health care.

"However, President Trump's address tonight gave no comfort to the 130 million Americans with pre-existing conditions or the families struggling to afford the prescription drugs they need. Once again, President Trump was not truthful about his actions in court to destroy pre-existing condition protections. Once again, President Trump pulled his punch on his promise to negotiate for lower prescription drug prices, which House Democrats delivered with the Elijah E. Cummings Lower Drug Costs Now Act, H.R.3.

"Next week, when the President presents his budget, the American people will see the stark reality of his agenda. A federal budget should be a statement of our national values, and the President has sadly shown that he does not value the good health of the American people. Democrats continue to urge the President to abandon his assault on seniors and families and to join us to deliver real progress in lowering the price of prescription drugs and making the bold investments needed to rebuild America's infrastructure in a green and modern way.

"The manifesto of mistruths presented in page after page of the address tonight should be a call to action for everyone who expects truth from the President and policies worthy of his office and the American people. The American people expect and deserve a President to have integrity and respect for the aspirations for their children.

"Americans were uplifted by the positive message and vision for progress for all communicated by Michigan Governor Gretchen Whitmer and Congresswoman Veronica Escobar of Texas. In the election, Democrats ran and won on a pledge For The People: lower health care costs, bigger paychecks, clean up corruption in government. And we will continue to be relentless in our pursuit of progress for hard-working families across America, For The People."