'Number of people' injured in 'major incident' at London Bridge 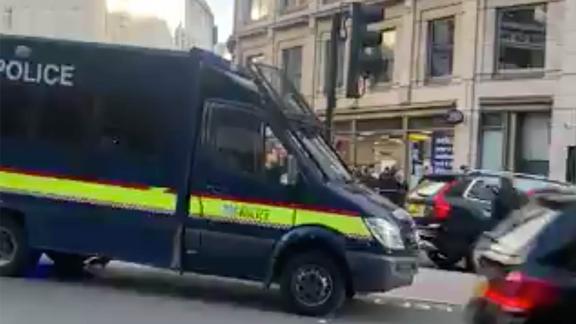 British police say they are responding to an incident unfolding in central London. London's Metropolitan Police said in a post on Twitter that they were in the "early stages" of the incident and called on public to follow instruction from officers at the scene.

A man has been shot by police and a number of people are believed to have been injured in a major incident in central London.

Metropolitan Police said that as a precaution they were responding to the incident at London Bridge "as though it is terror-related".

A number of ambulance crews were at the scene Friday afternoon and a "major incident" had been declared, the London Ambulance Service said on Twitter.

Images and video on social media showed emergency vehicles on the north side of the bridge, and onlookers reported hearing what sounded like gunshots.

Lloyd Griffiths, 35, was on a bus on the bridge as the incident unfolded. He told CNN he saw an altercation as several people tried to wrestle a man with a knife before police intervened.

"Then police ran over with guns, screaming," before shooting the man, Griffiths added.

The police, who were called to the incident shortly before 2 p.m. local time, tweeted that circumstances around the incident remained "unclear" and that they would provide more information when possible.

Prime Minister Boris Johnson said he is "being kept updated on the incident at London Bridge and want to thank the police and all emergency services for their immediate response."

Other videos showed people evacuating pubs near the bridge. London Bridge is a busy area of the city which houses several restaurants, bars and businesses. A terror attack on the bridge in 2017 killed several people.

London Bridge train station, which serves the area, is closed and trains are not stopping, British Transport Police said. London mayor Sadiq Khan said he is in "close contact" with police.

Jinnat Ui Hasan told CNN he was in a meeting in a building near the incident when he heard "more than five" gunshots.

Elsewhere, Stevie Beer, 26, told CNN that her place of work which overlooks the bridge was in lockdown.

"A colleague out for lunch messaged to say there had been an incident on London Bridge and he was unable to cross back over the river. I went straight to the window and saw hundreds of people running off the bridge down Tooley Street," Beer told CNN.

"People looked so panicked. It was haunting. There were at least half a dozen police cars and halted buses. Our building is now on lock down but we've not been given any concrete information," she added.

Police earlier told CNN it was dealing with a "dynamic situation."