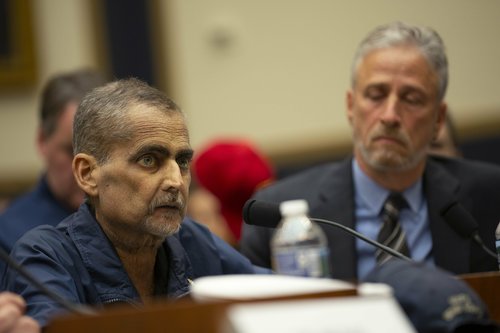 Exposure to the enormous cloud of toxins, dust and debris that resulted from the terrorist attack on the...

Exposure to the enormous cloud of toxins, dust and debris that resulted from the terrorist attack on the World Trade Center in 2001 has been linked to an increased risk of cardiovascular disease among first-responder firefighters, according to a new study.

The study, published in the medical journal JAMA Network Open on Friday, found that both immediate and repeated exposures to the dust during the months of cleanup following the attack was associated with elevated cardiovascular disease risk that lasted for up to 16 years.

Among the firefighters in the study, "the ones with the greatest exposure -- those present in the morning of 9/11 -- had a higher risk than those who showed up later in the week," said Dr. David Prezant, chief medical officer for the Fire Department of the City of New York and a professor at the Albert Einstein College of Medicine, who was senior author of the new study.

Risk varied by time arrived and spent on site

The study involved analyzing health data on 9,796 male firefighters in New York who reported to the World Trade Center site in the two weeks following 9/11.

The data, collected between 2001 and 2017, came from the Fire Department of the City of New York's Medical Monitoring Program.

The data showed that the firefighters who arrived at the World Trade Center site on the morning of September 11, 2001, had a 44% increased risk of cardiovascular disease over the next 16 years compared with those who arrived later, Prezant said.

"Those who showed up in the afternoon of 9/11 had a 24% increase compared to everyone else," he said. Additionally, "those showing up and being there for more than six months had a 30% increase."

The study had some limitations. It found only an association between World Trade Center exposure and long-term cardiovascular risk, but more research is needed to determine whether a causal relationship exists.

"We can not prove causality in a study of a little less than 10,000 people and we don't have a control group of unexposed. We have a control group of lesser exposed," Prezant said. "To take this study to the next level, we would have to compare it to a cohort of unexposed firefighters and then a cohort of the general population that are not firefighters."

The new study joins several others that have found an association between firefighters responding to the World Trade Center disaster and elevated health risks.

Previous studies have shown a link between exposure to carcinogens and other toxins in the dust from the World Trade Center wreckage and an increased risk of some cancers among people who worked at the site, including firefighters.

On Thursday, the Fire Department of the City of New York announced that it will add the names of 22 members who died of illnesses related to their work in rescue and recovery efforts at the World Trade Center to the FDNY World Trade Center Memorial Wall. More than 200 members have died of World Trade Center-related illnesses, according to the department.

"This solemn wall is a poignant and permanent reminder of the sacrifice of all that responded on September 11th and toiled for weeks and months at the World Trade Center searching for the innocent lives taken that day," Fire Commissioner Daniel A. Nigro said in a written statement.

"Because of their dedication and bravery, each year the already staggering loss suffered by the FDNY continues to grow as illnesses claimed the lives of those who so bravely served our city."

The new study comes about a month after President Donald Trump signed into law an act that authorizes the extension of the nation's 9/11 Victim Compensation Fund.

The fund was set to expire in 2020. The newly signed legislation, championed by comedian Jon Stewart, ensures compensation for victims through 2090.

The extension of the fund will ensure compensation for people injured during the 2001 terrorist attacks or the rescue and cleanup efforts that took place in the immediate aftermath of the attack under hazardous conditions.

Over time, the Victim Compensation Fund could "consider whether cardiovascular disease and other diseases that we've identified, such as autoimmune diseases, should be added to the list of covered conditions," Prezant said. "But that is a question for the future."

There are a few explanations as to why exposure to the World Trade Center attack could be associated with an increased risk of cardiovascular disease in the long term, said Dr. Leonardo Trasande, professor and director of the Division of Environmental Pediatrics at the New York University School of Medicine, who was not involved in the new study.

"One is that air pollution has long been known to be a major cardiovascular risk factor. It's a major contributor to the global burden of disease after all, not just in highly exposed firefighters," Trasande said.

"Second, the disaster produced a plume of toxic chemicals, the likes of which are not in your routine air pollution," he said. "Then there's the stress that's well known among people who were exposed to the World Trade Center disaster, especially responders like firefighters who are put in harm's way frequently to save lives. So there are three pathways by which the findings described here unfortunately were plausible."

Exposure to the plume of dust and toxins from the 9/11 attack also can be tied to abnormal cholesterol levels in children who were living or going to school near the World Trade Center at the time, according to a separate study led by Trasande and published in the journal Environment International in 2017. High cholesterol is a risk factor of heart disease.

"The good news is there are steps that people can take to prevent and reduce cardiovascular risk going forward, even if they've had substantially heightened risk," Trasande said.