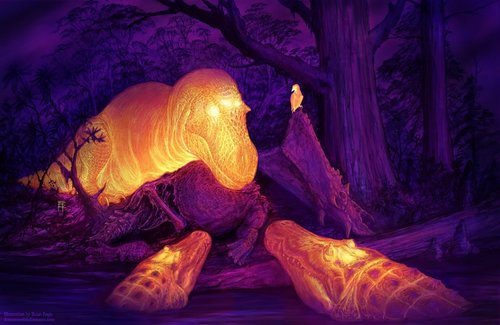 One of the largest predators to ever walk the Earth needed to cool off every now and then.Researchers believe they have now unlocked the secret to how...

One of the largest predators to ever walk the Earth needed to cool off every now and then.

Researchers believe they have now unlocked the secret to how Tyrannosaurus rex maintained a cool head. The carnivorous dinosaur had something akin to an air conditioner in its skull, according to a new study published Wednesday in the The Anatomical Record.

Previously discovered skulls belonging to T. rex included two large holes at the top. These were referred to a dorsotemporal fenestra. In the past, scientists believed this part at the roof of the skull was equipped with muscles that aided in T. rex's powerful jaw movements.

The researchers involved in the new study, including University of Missouri-Columbia professor of anatomy Casey Holliday, had a more difficult time making that connection.

"It's really weird for a muscle to come up from the jaw, make a 90-degree turn, and go along the roof of the skull," said Holliday, lead resaercher. "Yet, we now have a lot of compelling evidence for blood vessels in this area, based on our work with alligators and other reptiles."

To understand what might have been going on in T. rex's head, the researchers applied thermal imaging to modern reptiles.

Thermal imaging allows heat to be translated into visible light. The researchers used this technique on alligators at the St. Augustine Alligator Farm Zoological Park in Florida.

"An alligator's body heat depends on its environment," said Kent Vliet, study author and coordinator of laboratories at the University of Florida's Department of Biology. "Therefore, we noticed when it was cooler and the alligators are trying to warm up, our thermal imaging showed big hot spots in these holes in the roof of their skull, indicating a rise in temperature. Yet, later in the day when it's warmer, the holes appear dark, like they were turned off to keep cool."

This matches up with previous research on alligators and their cross-current circulatory system, "or an internal thermostat, so to speak,' Vliet said.

The thermal imaging data from the alligators was matched alongside T. rex fossils and other dinosaur remains. This allowed researchers to see how the two holes have evolved.

"We know that, similarly to the T. rex, alligators have holes on the roof of their skulls, and they are filled with blood vessels," said Larry Witmer, study author and professor of anatomy at Ohio University's Heritage College of Osteopathic Medicine. "Yet, for over 100 years we've been putting muscles into a similar space with dinosaurs. By using some anatomy and physiology of current animals, we can show that we can overturn those early hypotheses about the anatomy of this part of the T. rex's skull."

A large land predator like T. rex would need to be able to shed heat because it generated a lot of body heat in general, Holliday said. Having a "thermal window" in its head would help. They also may have panted, like birds and crocodiles.

The new interpretation of this mechanism in the T. rex skull changes our understanding of how some dinosaurs functioned in general. The special sets of blood vessels in their skulls, located near where our temple is, could act as a way to regulate brain and body temperature.

"Dinosaurs were likely more warm-blooded than we used to think, more like birds than lizards," Holliday said. "Being warmish-blooded would let them not rely on environmental temperatures as much, like cold-blooded lizards, but also control their own body temp through internal means."

This also means that T. rex jaw muscles and bit force may be smaller than previously believed.

In the future, Holliday and his fellow researchers will fly drones over wild alligators to conduct more thermal imaging.

Protests in Eugene continue for the 7th straight night