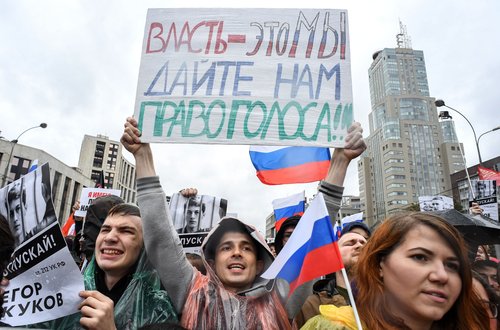 Google has been warned by Russia's state communications regulator to stop "advertising"...

Google has been warned by Russia's state communications regulator to stop "advertising" protests on YouTube ahead of local elections in Moscow.

The watchdog, called Roskomnadzor, said in a letter to Google on Sunday that it considered advertisements and push notifications that publicize protests as "interference" in its domestic politics.

Tens of thousands of people rallied in Moscow over the weekend calling for fair local elections. More than 200 people were detained, according to OVD-Info, a group that monitors police.

Protesters have gathered in Moscow for five weekends in a row demanding that authorities allow independent candidates to take part in city's upcoming local elections. Some protests have been sanctioned by authorities.

While it's not clear which specific accounts or channels Roskomnadzor was referring to, several YouTube accounts broadcast the protests live.

If Google does not take corrective action, Roskomnadzor said in a statement that it would respond to what it regards as attempts to obstruct "democratic elections in Russia."

Google did not respond to requests for comment on Monday.

Roskomnadzor has fined the search giant twice in the past year for failing to remove links to websites banned by the government, though the fines together amounted to less than $20,000 in total.

Russia has tilted hard in the direction of greater domestic censorship in recent years, and activists fear the creation of Chinese-style national firewall to censor content passing in and out of the country.

In May, Russian President Vladimir Putin signed into law new measures that would enable the creation of a national internet that's able to operate separately from the rest of the world.

In concept, the new law aims to protect Russia from foreign online restrictions by creating what the Kremlin calls a "sustainable, secure and fully functioning" local internet.

Homeless camp to be cleared out in downtown Eugene

A teen raised $10K to install a community baby box. Less than a year later, a newborn was found inside

Talent couple arrested after getting teens high on marijuana

Body found near Bandon alongside Hwy. 101

Affordable housing could be coming to Lane County Fairgrounds