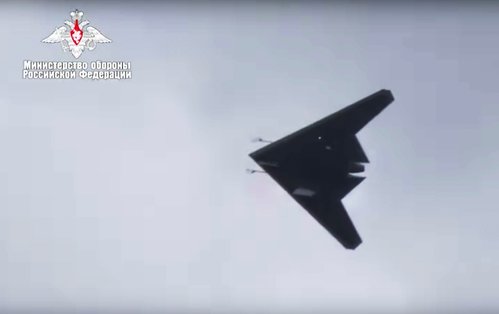 Russia's Ministry of Defense has published a s...

Known as 'Okhotnik' in Russian, the 20-ton heavy unmanned combat aerial vehicle (UCAV) performed its first test flight at a military airfield on Saturday, according to Russian news agency TASS.

Drones have become an integral part of modern warfare, carrying out both surveillance and attack missions, but Russia's program has traditionally lagged behind the US and other nations.

The drone features stealth technology and a jet engine that can propel it to a top speed of around 620 miles per hour, according to TASS.

In video footage posted on YouTube, the drone, covered in gray stealth paint, can be seen taking off, maneuvering in the air, and landing.

The whole flight lasted around 20 minutes.

There will be further test flights this year, with plans to develop the drone's autonomous flight capabilities, reports TASS.

The wedge-shaped drone was developed by Sukhoi, which also makes a range of military jets for Russia's armed forces.

Mathieu Boulègue, Russia expert at Chatham House, told CNN that Moscow only started developing drones in earnest 10 to 15 years ago.

'They've been able to turn things around and create an industrial base for drones,' he said. 'It's quite impressive.'

However the US has been using similar heavy strike drones for around 10 years, he said.

'Russia is late coming to the market,' said Boulègue.

While analysts have previously cautioned that Russian boasts of new military capabilities are often not backed up in reality, Boulègue believes the Hunter will eventually be deployed.

'It's a priority to get it out there,' he said, although the drone is only in the first stage of testing and likely won't be used until the late 2020s or early 2030s.

Boulègue stressed that the threat of the drone to Western nations is minimal.

The Hunter is unlikely to be used in combat situations, but it could be used in second strikes.

This is due to the fact that the military will be wary of losing even a single drone, said Boulègue.

The Hunter will serve as a technological demonstrator to prove that Russia can develop and deploy heavy strike drones, and will likely be marketed to third parties, he added.

It also faces competition from a rival strike drone, Orion, that is being developed by Kronshtadt Group for the Russian military.