Starbucks, in partnership with Nestlé, is launching a line of creamers to reach customers at home 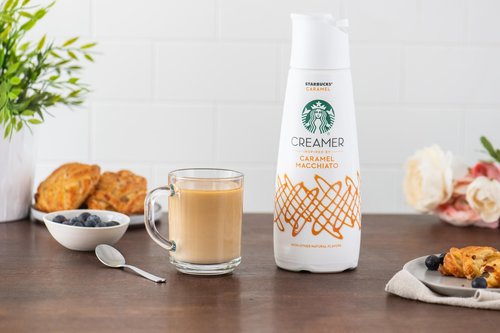 Starbucks is launching a line of creamers to reach more customers at home.The product is the latest to emerge from a 2018...

Starbucks is launching a line of creamers to reach more customers at home.

The product is the latest to emerge from a 2018 partnership between Starbucks and Nestlé. Together, the two companies have launched new Starbucks products, like coffee beans and Nespresso pods, designed to appeal to consumers who want to make specialty coffees themselves.

The new creamers come in caramel macchiato, white chocolate mocha and cinnamon dolce latte — flavors inspired by Starbucks' more indulgent drinks. They will be priced at about $5 for a 28 fluid-ounce container and start appearing in US grocery stores next month.

For Starbucks, the alliance with Nestlé helps establish a global market for coffee at home and continue to drive sales of those types of products in the United States. The coffee chain, which opened its 30,000th location this year, is using several tactics to entice customers, like modernizing stores, expanding delivery and tweaking its loyalty program. Coffee creamer is its first non-coffee item in the dairy aisle.

For Nestlé, it's a way to get Starbucks customers to buy products, like creamer and coffee pods, the company already makes.

Creamer in particular is an appealing category for both Starbucks and Nestlé.

Sales of coffee creamers have been growing steadily in recent years, said Daniel Jhung, president of the beverage division at Nestlé USA. He added that the growth is driven by Millennial coffee drinkers who want to be their own baristas at home.

For Starbucks, creamer is a "natural progression" within the partnership, said Duncan Moir, president of global channel development at Starbucks. He added that the new platforms should help customers "replicate" their experiences at Starbucks cafes in their own homes.

So far, the coffee alliance appears to be a success. Starbucks CEO Kevin Johnson said the partnership "exceeded our expectations" in the second quarter during a call with analysts discussing second-quarter results, adding that the partnership has helped Starbucks grow its global reach.

Starbucks remains focused on growing sales in its two biggest markets, the United States and China. The company's "'growth at scale' agenda is working," Johnson said. In the second quarter, Starbucks reported that sales at locations open at least a year ticked up 3% compared to the same time in 2018.

Reports of explosion heard in Corvallis, police are still investigating