Fewer measles cases reported last week, but it's not time to declare victory 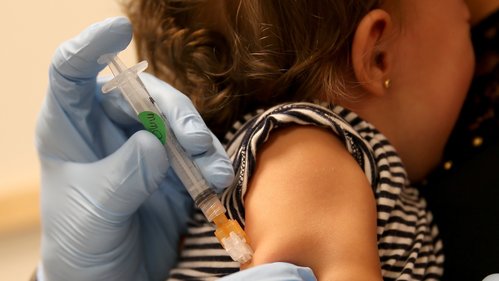 The number of measles cases reported in the United States has fallen the last few weeks, but experts say it's not time to declare victory.The...

The number of measles cases reported in the United States has fallen the last few weeks, but experts say it's not time to declare victory.

The US Centers for Disease Control and Prevention reported on Monday that the number of measles cases this year reached 1,109 across 28 states as of Thursday. That's an increase of 14 cases from the previous week.

While it's a smaller number of new cases than was typical in the spring, this year's outbreak hit the greatest number of measles cases reported in the United States since 1992 and since the measles virus was eliminated from the country in the year 2000.

"We're in a new normal now," said Dr. Peter Hotez, dean of the National School of Tropical Medicine at the Baylor College of Medicine in Houston and co-director of the Texas Children's Hospital Center for Vaccine Development.

"We haven't seen measles epidemics in the United States for over 20 years."

While specific factors contributing to what appears to be a regression in new measles cases remains somewhat unclear, Hotez said that there are a few factors that could be at play.

"Measles historically is seasonal. We know it peaks in the spring and then declines in the summer. So there is a seasonality to the virus, just like there's a seasonality to influenza," Hotez said, adding that another factor is that children are currently out of school.

"A couple of questions that I'm looking at is: One, what happens when kids come back to school in the fall? Because although measles cases have declined, they haven't disappeared," he said. "I am concerned that we're going to see the uptick again as we move into the fall months -- and then the other question: What happens in 2020? Will we see a big jump in the spring of 2020? In other words, is this peak in the spring of 2019 just the beginning of frequent peaks?"

As the measles outbreak grew earlier this year, attention turned to anti-vaccination messages online, prompting some social media platforms to suppress certain content that was deemed as spreading misinformation about vaccines.

For instance, Facebook has changed its ranking system to show fewer posts with misleading health claims. YouTube has removed ads from videos it considers as spreading misinformation. And Amazon has pulled anti-vaccination documentaries from its Amazon Prime Video streaming service. Hotez said, however, that those actions were not enough and efforts so far from social media and e-commerce groups have been "mostly cosmetic."

Many social media platforms have not actively taken down content containing misinformation about vaccines, he said.

"Nothing much has really changed," Hotez said. "I would say any decline in measles has happened without the help of social media and e-commerce."

When the number of measles cases surpassed 1,000 in the United States last month, US Health and Human Services Secretary Alex Azar said in a statement that his department was working to stop the spread of misinformation about vaccines.

"The Centers for Disease Control and Prevention, alongside others across HHS, will continue our efforts to support local health departments and healthcare providers in responding to this situation, with the ultimate goal of stopping the outbreak and the spread of misinformation about vaccines, and increasing the public's confidence in vaccines to help all Americans live healthier lives, safe from vaccine-preventable diseases," he said in the statement.

Measles is one of the most contagious diseases in existence, spreading through coughing and sneezing. The virus can linger in the air for up to two hours after an infected person coughs or sneezes. If someone who is not immune to the virus breathes that air or touches an infected surface, they can become infected.

To protect yourself against the measles, doctors recommend getting vaccinated. Other steps include washing your hands often or using hand sanitizer, avoiding touching your eyes and mouth, disinfecting surfaces and toys with standard household products, and refraining from coming into close contact with anyone who's sick.