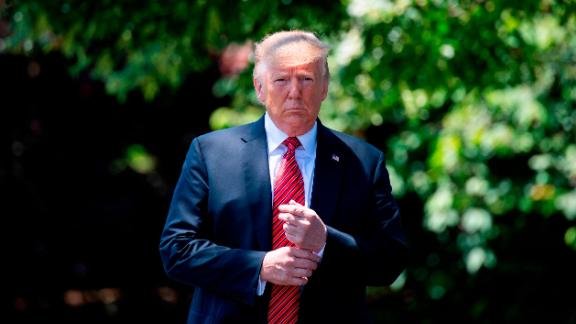 On the eve of officially kicking off his reelection campaign, President Trump took to Twitter to announce US Immigration and Customs Enforcement will begin the process of removing "millions of illegal aliens" beginning next week.

President Donald Trump on Monday night issued a vague threat to deport 'millions' of undocumented immigrants next week, though he did not provide details and administration officials did not respond to requests for clarification.

Trump said the agency will begin deporting undocumented immigrants 'as fast as they come in,' and called on congressional Democrats to address the 'border crisis.' It was not immediately clear what plan Trump was talking about and neither the White House nor Immigration and Customs Enforcement responded to CNN's request for clarification on Monday.

The tweets came hours before the President is set to officially kick off his 2020 bid. He launched his 2016 campaign vowing to take a hard stance against illegal immigration by building a wall and ridding the country of undocumented immigrants, but deporting millions of people, as Trump suggested Monday, requires vast resources and ICE is already strained by migrants crossing the border illegally.

Acting Homeland Security Secretary Kevin McAleenan declined to comment to CNN on the President's tweets as he left a speaking engagement Tuesday morning.

A senior administration official told CNN on Tuesday that over '1 million' undocumented immigrants 'have been issued final deportation orders by federal judges yet remain at large in the country' and called enforcing those judicial orders a 'top priority' for ICE.

Earlier this month, ICE's new acting director, Mark Morgan, said the agency was exploring options to arrest and deport families who have gone through their legal proceedings and have been ordered to depart the US. That operation would target migrants with a 'final order of removal,' Morgan said.

Morgan described the potential deportation of families as a way to reduce the incentive for migrants to travel to the United States. Families are often released into the US following their apprehension, due to limits on the time children can be held in government custody.

Former Homeland Security Secretary Kirstjen Nielsen had rejected the plan because the policy of the department was to prioritize criminals for deportation, according to one US official.

US officials with knowledge of the 'preparations have said in recent days that the operation was not imminent,' and following Trump's tweets, ICE officials said they 'were not aware that the president planned to divulge their enforcement plans on Twitter,' The Washington Post reported Monday.

Under former President Barack Obama, the department had deployed an operation targeting families in the later years. It was revived in Trump's first year in office.

Last year, the President expressed frustration toward Oakland, California, Mayor Libby Schaaf after she issued a public warning for the immigrant communities in her city about impending raids by ICE in the the San Francisco Bay Area.

'They had close to a thousand people ready to be gotten, ready to be taken off the streets ... they say 85% of them were criminals and had criminal records. And the mayor of Oakland went out and warned them all,' Trump said at the time, adding that her actions were a 'disgrace.'