Mom warns others after kids sent to hospital with chlorine poisoning 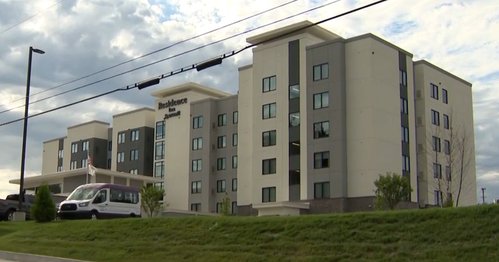 A family visiting Nashville said their vacation ended at the hospital after their kids became sick with chlorine poisoning.

NASHVILLE, Tenn. (WTVF) -- A family visiting Nashville said their vacation ended at the hospital after their kids became sick with chlorine poisoning.

"We were all really scared," Kathy Hartman said. Hartman video chatted with NewsChannel 5 while she and her family were driving home to Chicago. She told me her three kids, along with her niece and two nephews, were playing at the indoor pool at the Residence Inn at Opryland when she noticed something strange.

"Everybody was coughing and experiencing respiratory complaints," Hartman said.

She said after some time went by she called her pediatrician.

"He said right away, 'this is chlorine poisoning, you need to go and take these kids to the emergency room right away,'" Hartman added.

She said she took the kids to Monroe Carell Jr. Children's Hospital at Vanderbilt. Hartman said the chlorine was in the air, and said a worker at the Residence Inn admitted the pool room's dehumidifier was broken.

"He said, 'look, the dehumidifier in the pool broke and our hotel was booked solid so we made the call to say it was safe to swim, but that was the wrong call,'" Hartman said.

But a manager at the Residence Inn denied the allegations over the phone on Wednesday. He said the chlorine levels in the pool area were cleared by a local company and by the Nashville Fire Department.

In a text message, Nashville Fire Department Public Information Officer Joseph Pleasant said, "the levels for chlorine were in the permissible range for being airborne however there should not have been any readings at all so the pool is closed."

Hartman said she hopes the story serves as a warning to other parents.

"You think you're safe in an indoor pool environment that's run by a hotel, but look for the warning signs," she said. "Chlorine poisoning is real and its serious"

According to the Centers for Disease Control , they include coughing, chest tightness, nausea and burning sensations in your throat, nose or eyes. In extreme cases it can cause vomiting and fluid in your lungs.