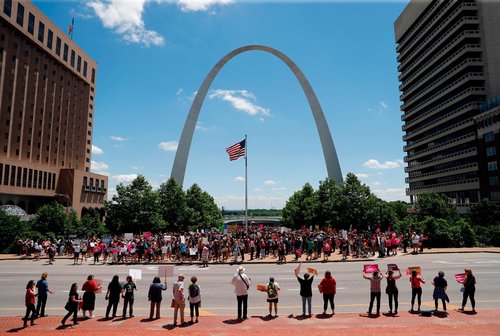 Drama unfolding in America's heartland could have a ripple effect across the country as Missouri is on the verge of becoming the first state in the country w...

Drama unfolding in America's heartland could have a ripple effect across the country as Missouri is on the verge of becoming the first state in the country with no abortion clinics.

Five other states are also one clinic away from that fate.

While a judge considers the fate of Missouri's last abortion clinic, the state's health director doubled down on claims the clinic has "issues." But he refused to specify what those issues were.

Missouri's last clinic standing -- Reproductive Health Services of Planned Parenthood of the St. Louis Region -- is suing the state's health department for refusing to renew its license, which was set to expire last Friday.

Judge Michael Stelzer issued a temporary reprieve Friday, preventing the license from expiring until he heard arguments from both sides this week.

Now, many are wondering when the judge will decide whether the clinic can keep performing abortions while the lawsuit works its way through the courts.

"We're just waiting on pins and needles like the rest of you to hear what he says," said M'Evie Mead, director of Planned Parenthood Advocates in Missouri.

'We can never sacrifice safety'

What's happening in Missouri reflects a growing trend nationwide. States are imposing strict rules on clinics in the name of safety, while abortion rights advocates say officials are really trying to eliminate abortion.

He said the St. Louis clinic had problems during its annual inspection this year.

"As we did our annual investigation, some issues came up that we would very much like to talk with their physicians about," Williams told reporters Wednesday.

But he refused to specify what kinds of "issues" the clinic had.

Mead, the Planned Parenthood advocate, accused the state of making "unsubstantiated and vague allegations that they keep throwing out there."

"They have politicized the process, and now they are moving goal posts in order to back up their unsubstantiated claims," she said.

The abortion debate in Missouri heated up after Gov. Michael Parson signed House Bill 126 into law. The new legislation bans abortions at eight weeks of pregnancy, even in cases of rape and incest. It's set to go into effect August 28.

"DHSS now is attempting to shut down (the abortion provider), by unlawfully conditioning a decision ... on completion of a supposed 'investigation' of a patient complaint," the lawsuit said.

The governor has also declined to say what the clinic's violations are, saying only, "They are well aware of the deficiencies."

Parson said details could not be released "because it is still an ongoing investigation."

When states are 1 closure away from no abortions

Missouri isn't the only state that has teetered on the brink of losing its last abortion clinic over licensing disputes.

In 2017, Kentucky refused to renew the license of its last abortion clinic, claiming its "transfer agreement" was inadequate.

Transfer agreements are written agreements between an abortion clinic and a hospital, saying the hospital agrees to accept the clinic's patients in case of emergency.

Critics say transfer agreements are unnecessary because federal law requires emergency rooms to accept anyone who shows up.

A federal judge ruled in favor of the clinic, saying Kentucky's transfer agreement law was unconstitutional and violated the 14th Amendment.

Is mask requirement 'too much to ask'? Community weighs in