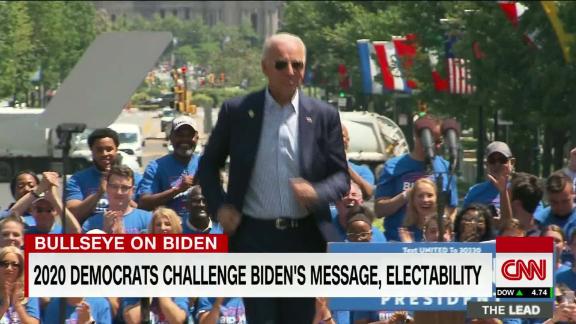 Former Vice President Joe Biden continues to be the top pick for the Democratic nomination for president among Democrats and Democratic-leaning registered voters, according to a new CNN poll conducted by SSRS, but his support has faded some since just after the official launch of his campaign.

That shift comes as more potential Democratic primary voters say they have made up their minds about whom to support (44% say so, up 8 points since April), even before the top 20 candidates take the stage for the first formal debates of this cycle, set for later this month.

The poll finds 32% support Biden, down from 39% saying they supported him in an April CNN poll. That survey was fielded in the days immediately following Biden's formal entry into the race. Since then, the former vice president has been running with an eye toward protecting his early advantages, making fewer public appearances than his fellow candidates even as they begin to turn their fire on him.

But none of the other candidates have shown notable gains in the last month. Vermont Sen. Bernie Sanders continues to stand alone in second place with 18%, followed by California Sen. Kamala Harris with 8%, 7% for Massachusetts Sen. Elizabeth Warren and 5% each for South Bend, Indiana, Mayor Pete Buttigieg and former Texas congressman Beto O'Rourke. New Jersey Sen. Cory Booker comes in with 3% support, with former Secretary of Housing and Urban Development Julián Castro and Minnesota Sen. Amy Klobuchar at 2% each. The remaining 14 candidates tested in the poll landed at 1% or less.

The poll suggests Biden and Sanders are reaping the benefits of being better known by locking in their supporters early. Among those who say they have made up their minds, Biden's support rises to 43%, Sanders climbs to 29%.

Both also have overwhelmingly positive favorability ratings among potential Democratic voters. About three-quarters say they have a positive view of each (77% for Biden and 76% for Sanders), well ahead of their closest competitors for the nomination (Harris is viewed positively by 52% of Democratic-leaning voters, Warren 63%).

Favorability numbers for three other top competitors also lag behind Biden's ratings. Buttigieg remains mostly unknown nationwide (59% have no opinion or haven't heard of him), while Harris and Warren each earn more negative reviews than positive ones.

The 2016 presidential election was the first in the era of modern polling to feature two candidates with net-negative favorability ratings. Exit polling indicated that President Donald Trump was able to capitalize on Clinton's negative numbers by winning a larger share of those voters who held negative opinions of both.

With the exception of Biden and Buttigieg, each of the remaining six Democratic candidates tested in the poll is viewed more negatively by Republicans than they are positively by Democrats. The situation is particularly dire for one recent entrant to the race, New York City Mayor Bill de Blasio: 49% of Republicans view him negatively while just 18% of Democrats see him positively. Among independents, Biden is the only tested candidate who tilts net positive.

Within the pool of potential Democratic primary voters, many of the basic demographic divides that have defined the contest thus far remain. Independents, younger voters, and liberal voters continue to be more apt to support Sanders than are self-identified Democrats, older voters and those who are more moderate or conservative.

The divide by race appears to have softened compared with April's survey: Biden leads in both groups, but his support is roughly the same among whites and non-whites. Democratic voters who hold college degrees are more likely to consider candidates other than Biden and Sanders. And there are still no significant differences between men and women in whom they support at this point.

And heading into 2020 with an unprecedentedly large field, Democratic-leaning voters are more apt to see that long list of choices as an asset (53%) than a bad thing (45%) for the party.

Regardless of who winds up leading the Democratic ticket in 2020, voters overwhelmingly say it's a better approach for that candidate to focus on bringing Democrats together around his or her policy positions (81% say so) than around dissatisfaction with Trump (15% say so).

Colorado Sen. Michael Bennet hits 1% in this poll, his third such poll this cycle among those which the DNC is using to assess qualification for the upcoming debates, making him the 20th candidate to reach those standards. Candidates tested in this poll who have not yet met the threshold include Montana Gov. Steve Bullock (he has hit 1% in two polls so far), Miramar, Florida, Mayor Wayne Messam (1% in one poll) and Massachusetts Rep. Seth Moulton (has not hit 1% in any polls). If any of those candidates hit at least 1% in enough qualifying polls before the qualification deadline, tiebreakers will determine which 20 candidates make the debate stage.

The CNN Poll was conducted by SSRS May 28 through 31 among a random national sample of 1,006 adults reached on landlines or cellphones by a live interviewer. Results for the full sample have a margin of sampling error of plus or minus 3.8 percentage points. For the subsample of 412 Democrats and Democratic-leaning independents who are registered to vote, it is 6.0 points.

Deputies searching for wreck after report of distress call over radio