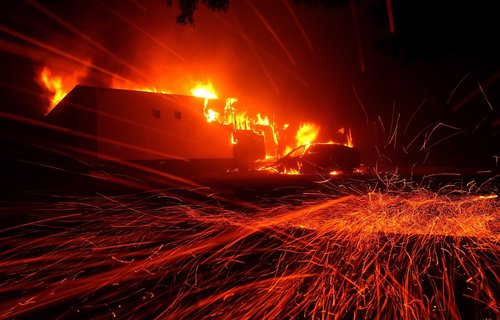 California regulators have given utilities new rules about intentionally cutting power to prevent wildfires, including how to prepare the public for the outa...

California regulators have given utilities new rules about intentionally cutting power to prevent wildfires, including how to prepare the public for the outages.

Thursday's move by the California Public Utilities Commission comes months after California suffered its deadliest and most destructive wildfire, the Camp Fire.

The commission had in recent years said the state's investor-owned electric utilities could proactively interrupt power to reduce the chances that power equipment could cause or contribute to a wildfire. A utility might do this in high winds, for example.

The state came up with guidelines for these intentional power outages in 2018, and Thursday's decision adds to these rules for the investor-owned utilities, such as Pacific Gas and Electric Co., Southern California Edison and San Diego Gas & Electric.

• Utilities must cut power only as a last resort, and must justify why the utility chose the outage over other measures.

• They must integrate their warning programs with other agencies that relay information about emergencies.

• They must engage in a statewide education program, telling the public about how it can prepare for the outages, and how to receive information alerts during an outage.

• The education program has to communicate in a number of languages -- English, Spanish, Cantonese, Mandarin, Tagalog, Vietnamese, Korean and Russian -- where those languages are spoken in the state.

'De-energizing power lines may be necessary as a last resort to avert devastating utility-caused wildfires,' Commissioner Clifford Rechtschaffen said in a news release. 'Today's decision provides important guidance for how utilities must notify vulnerable populations, first responders, and the public about such events, and other protocols they must follow.'

Earlier this month, investigators said PG&E is responsible for the devastating 2018 Camp Fire -- a blaze that killed 85 people and destroyed thousands of structures.

The California Department of Forestry and Fire Protection said that electrical lines owned and operated by PG&E started the fire early November 8, and that dry vegetation, strong winds, low humidity and high temperatures contributed to its spread.

In February the company said it was 'probable' that its equipment started the Camp Fire by coming into contact with nearby vegetation. The company said that a part had separated from a PG&E tower that was near the fire's starting point, and that a subsequent inspection of the transmission line identified equipment that should have been repaired or replaced.

The power company filed for bankruptcy in January as it came under pressure from billions of dollars in claims tied to deadly wildfires.