Gorillas perfect their selfie style in photo with park ranger 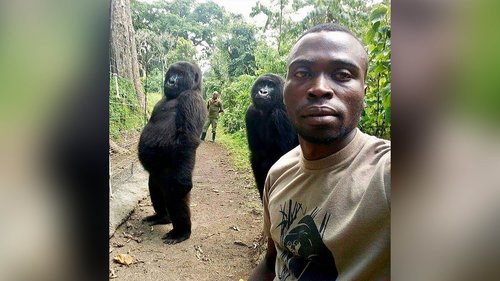 Two gorillas have been snapped apparently mimicking human behavior, in a remarkable selfie with a park ranger who helped rescue them as babies.The pho...

Two gorillas have been snapped apparently mimicking human behavior, in a remarkable selfie with a park ranger who helped rescue them as babies.

The photo, taken by a worker at Virunga National Park in the Democratic Republic of Congo, swiftly went viral after being shared on Facebook.

"Another day at the office..." Mathieu Shamavu wrote alongside the image, which has been shared more than 20,000 times.

Female gorillas Ndakazi and Ndeze appear to be naturals in front of the camera; one stands proudly in a power pose with her feet wide apart, while the other leans forward to make it into the shot.

"Those gorilla gals are always acting cheeky so this was the perfect shot of their true personalities," Virunga National Park wrote on Instagram.

"Also, it's no surprise to see these girls on their two feet either -- most primates are comfortable walking upright (bipedalism) for short bursts of time," it added.

The park, which stretches along the northeast region of the country, is home to 22 primate species, including three great apes.

It's estimated that 1,000 mountain gorillas inhabit the site.

More than 600 rangers work to safeguard wildlife at the park, a 3,000-square-mile site that has frequently seen violence and outbreaks of conflict.

Several rangers have been killed there, and two Britons were kidnapped on the site last year.

Another ranger, Hakizimana Sinamenye Chadrack, died in March after sustaining serious injuries from a hippo, the park said on its website.

Deputies searching for wreck after report of distress call over radio