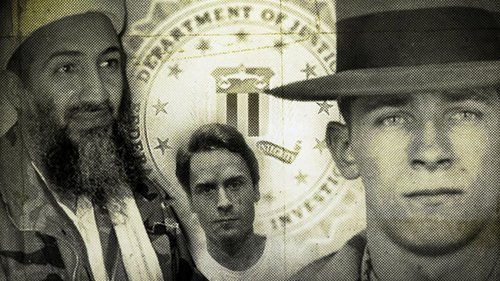 It's our modern-day version of the "Wanted" posters that used to populate old Western movies.Sixty-nine years ago today, the FBI created its...

It's our modern-day version of the "Wanted" posters that used to populate old Western movies.

Sixty-nine years ago today, the FBI created its Ten Most Wanted Fugitives list. Since then it's become part of American pop culture and featured some of the country's most notorious and dangerous criminals: Ted Bundy. John "Whitey" Bulger. Osama bin Laden.

The FBI launched its Ten Most Wanted program on March 14, 1950. Almost seven decades later, it's still making news. In the past month, authorities captured or killed two of its members.

Its history is the story of our own collective effort to grapple with evil.

It began with a conversation between Hoover and a journalist

It has its roots in a list of 28 "public enemies" the Chicago Crime Commission published during the Prohibition era.

Throughout the 1930s, then-FBI director J. Edgar Hoover and his bureau used the term "public enemy" to describe criminals like Al Capone, John Dillinger, and "Baby Face" Nelson. But the FBI never formally named a Public Enemy No.1.

The Ten Most Wanted list began with a conversation in 1949 between Hoover and William Kinsey Hutchinson, the editor-in-chief of the International News Service (which later became part of the United Press International). The reporter wanted to know who the "worst of the worst" were.

Hoover furnished a list. On February 8, 1949, newspapers across the country ran Hoover's list of the FBI's top 10 fugitives. It drew enormous interest, and leads from the general public poured in.

Only fugitives whose IDs are known make it into the list

The process begins when the FBI's Criminal Investigative Division asks the bureau's 56 field offices to submit names of the highest-profile fugitives they're searching for. Special Agents at the CID and in the FBI's Office of Public Affairs review the nominees and then submit proposed additions to the list to FBI upper management.

Those on the list must be named criminals with photos and warrants for their arrest. Notorious killers like the Unabomber and the Beltway Sniper never made the Ten Most Wanted list because their identities weren't public until their capture. And the identity of the Zodiac Killer, who terrorized Northern California in the late '60s and early '70s, remains unknown.

Officially the FBI says the list is "designed to publicize particularly dangerous fugitives who might not otherwise merit nationwide attention."

Christopher Allen, who heads up the Ten Most Wanted program at the FBI, told CNN his unit "creates the iconic wanted poster," writes foreign language translations of the "wanted" notice and often enlists outdoor advertising agencies in getting criminals' faces plastered on billboards.

For decades, Ten Most Wanted fliers were displayed at post offices, but that's less common now as the cash-strapped US Postal Service devotes more display space to marketing its own products.

It has helped catch some high-profile fugitives

Sometimes, the FBI will leave out a name on purpose

Of the 521 fugitives who've made the list in its 69 years of existence, the FBI says 162 of them were caught with the help of tips from the public.

"His show literally caught hundreds of FBI fugitives," Allen said, including 17 of the bureau's Ten Most Wanted.

In certain circumstances, Allen said, it's better to not add a fugitive list to the list, if the publicity might spoil an ongoing investigation. If agents are working on a sensitive case in a local area, a fugitive might flee after seeing his or her face on a billboard or a viral news story.

Just 10. Black Panther activist and academic Angela Davis made the list in 1970, for charges of kidnapping and murdering a judge. The FBI caught her almost two months later.

She maintained her innocence, a jury acquitted her in 1972, and she had a lengthy career as an activist and professor at several universities.

Some notorious criminals never make it

Some criminals don't make the list if they are already well-publicized, Allen said. And in some cases, arrest warrants might have been issued by a separate law enforcement agency. For instance, Joaquin "El Chapo" Guzman did not appear on the FBI's list because his case was handled by the Drug Enforcement Agency and was already high profile.

Some of the last half-century's most notorious criminals have not been on the list, including David Berkowitz, also known as the New York City serial killer "Son of Sam," who only became a suspect shortly before his 1977 arrest.

Gambino crime family boss John Gotti had a famous face, and suspicions abounded that he'd risen to power by orchestrating the murder of mafioso Paul Castellano. But the "Teflon Don" didn't make the Ten Most Wanted because the FBI and others couldn't get any charges to stick until 1992.

The 10 on the list aren't in any particular order

That's because in February, FBI agents tracked Greg Alyn Carlson, accused of burglary and sexual assault, to a North Carolina hotel room and killed him during a struggle.

And last week, Lamont Stephenson became the latest suspect to be removed from the list after authorities arrested him in Maryland on Thursday morning, on murder charges specifying that he asphyxiated his fiancee and her chihuahua.

With two holes on its list, the FBI will again begin the process of nominating new fugitives to the Ten Most Wanted.

Construction to start on Scottsburg bridge next month