CNN investigation raises questions about the deaths of James Brown and his third wife, Adrienne 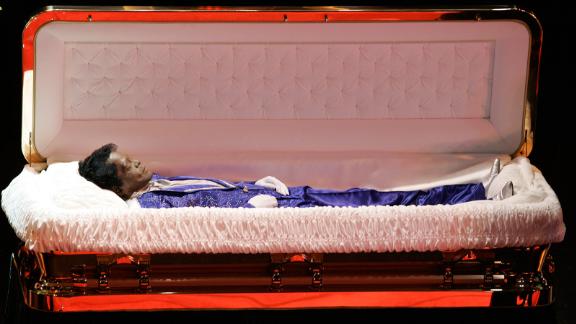 A woman says James Brown raped her. She also thinks he was murdered. A CNN investigation looks at the questions surrounding the Godfather of Soul's death.

At least 13 people who knew James Brown have said they want an autopsy or a criminal investigation of his death, according to a new CNN investigative series.

These skeptics include Dr. Marvin Crawford, who signed Brown's death certificate at an Atlanta hospital in 2006. In an exclusive interview with CNN, Crawford said he never believed that Brown died of natural causes.

"He changed too fast," Crawford said. "He was a patient I would never have predicted would have coded. ... But he died that night, and I did raise that question: What went wrong in that room?"

Officially, the Godfather of Soul died of a heart attack and fluid in the lungs at age 73 in the early hours of Christmas Day 2006. Twelve years later, his manager, his widow, his son, and several friends and associates all tell CNN there are serious questions about Brown's death that can only be answered by forensic investigators.

READ: The Circus Singer and the Godfather of Soul

Based on interviews with nearly 140 people, the three-part series also examines the 1996 death of Adrienne Brown, James Brown's third wife. Although authorities in California found no sign of foul play when Adrienne Brown died while recovering from plastic surgery, a friend always believed she was murdered.

In 2017, the retired police detective who investigated Adrienne Brown's death showed CNN the pages of a notebook that he said a confidential informant had given him in 2001. In those pages, which the detective says he read for the first time after CNN contacted him in 2017, the informant alleges that a doctor confessed to murdering Adrienne Brown with a fatal drug overdose. CNN found and interviewed the doctor, who denied the allegations.

The police did not open a criminal investigation when James Brown died in 2006. But his friend Andre White and others have alleged that Brown was murdered.

In the hours after Brown's death, Dr. Crawford says he recommended an autopsy. But Brown's daughter Yamma Brown declined the autopsy. When questioned about that decision by CNN, she did not offer an explanation.

CNN asked another daughter, Deanna Brown Thomas, about an allegation that Brown's crypt was empty. She would not say whether Brown's remains were in the crypt.

The CNN investigation began in 2017, after a circus singer named Jacque Hollander called a reporter to say she had information about Brown's death. She had worked with Brown as a songwriter in the 1980s and later alleged that he raped her.

After that incident in 1988, for which Brown was never prosecuted, Hollander began saving evidence relating to him and his associates. She collected numerous boxes of documents and tapes in the course of three decades. CNN examined Hollander's collection and also found independent corroboration for many of her claims.

The reporting involved travel through nine states, a review of tens of thousands of pages of police and court records, analysis of more than 1,300 pages of text messages from Hollander's iPhone, and the forensic testing of a woman's shoe in a mysterious black duffel bag.