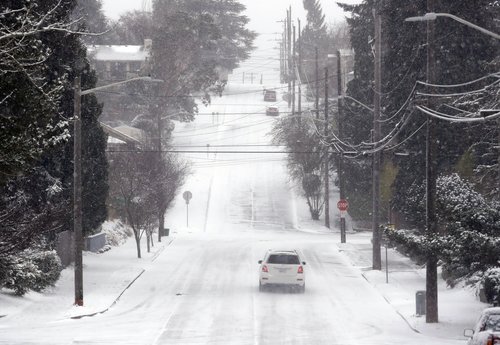 One of the biggest snowstorms in years walloped Seattle on Monday, shutting down schools and businesses, delaying airline fights, and tying up traffic on maj...

One of the biggest snowstorms in years walloped Seattle on Monday, shutting down schools and businesses, delaying airline fights, and tying up traffic on major highways.

About half a foot of snow fell on the Emerald City, as much as it usually gets all year, CNN meteorologist Judson Jones said. That was good news for snow lovers.

"Roadway conditions, perfect for sledding ... not so much for driving. Lots of kids (and cops) out sledding so please drive safely and take it slow," tweeted the police department in nearby Bothell.

The now started falling Sunday afternoon and came down heavier than many people expected.

Seattle Public Schools first announced that classes would start two hours late for its 53,000 students. "But as the snowfall increased, it was determined that roads were too challenging with ice and snow," spokesperson Tim Robinson said in an email.

Schools shut down entirely for Monday in Seattle and surrounding systems. On Tuesday, Seattle schools will start two hours later than usual, the school system tweeted, adding that conditions will be reassessed early Tuesday morning.

Much of the West was pounded by rain, wind and snow, CNN meteorologists said. Blizzard warnings were in effect for parts of the Sierra, and much of the Northwest was under winter storm warnings and advisories. Temperatures were expected to drop into the 20s on Monday night in Seattle.

At the Seattle-Tacoma International Airport, about 2.5 inches of snow was reported, causing flight delays of three-plus hours.

"We don't often see a white airfield, but when we do, we keep it clear!" the airport tweeted.

More than 12,000 people were without power in Washington state due to snow-related outages.

The company warned about outages continuing, because there were 33 in its service area, impacting about 6,000 people.

Shelters for the homeless were opened or expanded in the King County Administration Building and the Seattle Center Exhibition Hall.

"If you or someone you know is living outside during this period of severe cold, let them know about this opportunity to stay safe and warm," the Seattle mayor's office tweeted

The Washington State Department of Transportation tweeted that it deployed 100 plows and trucks between King County and the Canadian border. Two of the department trucks were struck by other drivers Sunday night, the DOT said.

The DOT said numerous spinouts were reported on interstates, and Interstate 5 through Seattle was shut down at times for snow removal and because of wrecks.

The Seattle DOT put 37 plows on the street, some loaned from other agencies, and others trucks outfitted with plowing equipment, said Ethan Bergerson, spokesperson for the agency.

Many people had fun in the snow. Twitter was filled with pictures of people skiing and ice skating on city streets and the police department in Duvall, about 40 miles east of Seattle, posted a Facebook video of officers with a SWAT shield having a snowball battle with a group of kids in a field. The kids won.