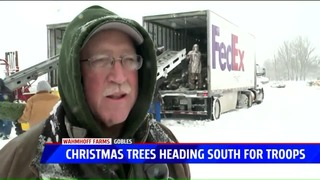 Dozens of volunteers gathered at Wahmhoff Farm Nursery to send off 600 Christmas trees to military families in North Carolina.

Gobles, MI (WXMI) -- Before the packing began, Dan Wahmhoff stood in the snow in his coat and hoodie and thanked dozens of volunteers for coming to Wahmhoff Farm Nursery Monday morning. They too were bundled in hats, scarves and gloves, ready to lift close to 600 Christmas trees.

“Folks like yourself coming here to volunteer your time in this kind of weather, it’s just so great,” Wahmhoff said to the crowd. “I think we all appreciate our troops.”

After a quick prayer, they were off to work. As part of the annual Trees for Troops event at Wahmhoff Farms, volunteers lifted tightly-bound, five-foot pine and fir trees and placed them on conveyor belts that fed into two FedEx trucks. Volunteers inside the trucks then stacked the trees.

“It’s an event we’ve been doing since 2005,” Wahmhoff said. “We’re just one of the participants. We happen to be a centrally-located farm. So, other farms bring their trees here.”

Farms in Allegan County and in the Lansing area were among the seven farms that donated trees to the event at the Wahmhoff site, he said. A similar loading and packing event was going on in Manton at the same time. All the trees were packed for military families the Marine Corps base at Camp Lejeune in North Carolina.

“It’s a big deal to me to be able to contribute back, to give them something positive for their Christmas time,” Wahmhoff said. “I know a lot of them are sacrificing it, away from their families, or the families are by themselves.”

Veteran Pete Matthews said he remembered his first holiday season away from his family. It was 1961, and he was serving in the U.S. Coast Guard at the time.

“Being a young person, first time really a long way from home, it’s good and it’s bad,” Matthews said. “I spent Christmases in the North Atlantic, Thanksgiving at sea, where you got processed turkey.”

However, for the families at Camp Lejeune, they'll be getting Christmas trees on Thursday, November 29. The volunteers finished loading both trucks within an hour. Once they were done, the trucks began their 890-mile trek south, all travel expenses covered by FedEx.

“It’s a nice little touch to give them a feeling of home,” Wahmhoff said.