Stock market freakout: Wall Street bets the boom may be over 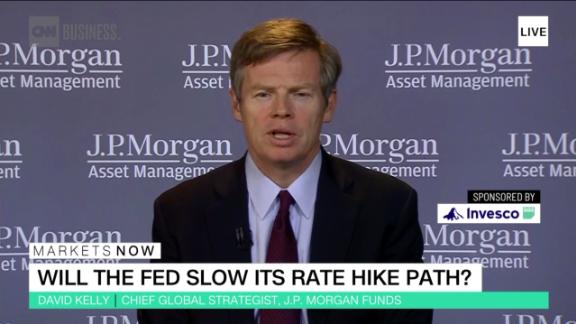 Chief Global Strategist for JPMorgan Funds David Kelly explains why current market turmoil is a normal correction, not a bear market, and why he doesn't expect a recession anytime soon.

Investors are increasingly betting that the rapid economic and profit growth of the past year is about to come to an abrupt end.

That forecast prompted a freakout on Wall Street over the past two months. The Dow has shed 2,300 points since early October as investors have come to grips with the gloomier outlook. Investors are fleeing former tech darlings like Apple (AAPL), Facebook (FB) and Amazon (AMZN), knocking the Nasdaq 14% below its all-time high.

The turmoil has wiped out all of the market's gains for the year, a significant development following the extreme euphoria that took hold in late January.

"We are beginning to get the scent of a possible slowdown," Kristina Hooper, global market strategist at Invesco, wrote to clients on Monday.

A wide variety of forces have combined to darken the outlook. Tariffs, freight costs and wage hikes are beginning to ding record-high corporate profits. The Federal Reserve's rate hikes are raising borrowing costs -- and squeezing the credit-sensitive housing and auto markets. Investors fear the Fed will hike the United States into a recession.

The corporate tax cuts enacted in late 2017 won't boost bottom lines next year any more than they did this year. Boom-to-bust oil prices have crashed into a bear market. Germany and Japan, the world's No. 3 and No. 4 economies, are already contracting. And China and the United States are in a chilling trade war.

Taken together, the backdrop points to an end of the heady days of the past year.

Smead said that a "light switch went off" at the end of August causing investors to rush out of the most expensive parts of the stock market.

"Big cap tech and growth darlings are absolutely getting crushed," he said.

Goldman Sachs, on the other hand, isn't worried about an imminent bear market.

"We expect the current bull market in US equities will continue in 2019," David Kostin, chief US equities strategist at Goldman Sachs, wrote to clients on Tuesday.

The biggest headwind may be earnings, the central driver of stock prices. S&P 500 earnings per share will slow dramatically to 6% in 2019 and just 4% in 2020, Goldman Sachs predicts.

That's quite the reversal from the breakneck pace of earnings growth in 2018, which is estimated at 23%.

Domestic economic growth may have also peaked. US GDP growth will decelerate from 4.2% in the second quarter of 2018 to 1.6% at the end of 2019, Goldman Sachs projects.

Slowdown concerns have already caused economically sensitive stocks to tumble. Boeing (BA) is down 10% in November, while Caterpillar (CAT) has tumbled 22% this year. Investors have fled the most expensive pocket of the market: former leaders like Netflix, Alphabet (GOOGL) and Nvidia (NVDA) are all down sharply from their highs.

The good news is that many economists believe the recovery from the Great Recession will continue through at least July 2019, making it the longest expansion in modern history.

While Goldman Sachs only sees a 10% chance of a recession in the next year, the probability rises to 43% within three years. In the past three cycles, each time the chances of a recession during the following three years reached 40%, Goldman Sachs said the economy began to contract within six to eight quarters. The firm said that suggests the next US recession will begin in the second half of 2020, echoing what Moody's Analytics economist Mark Zandi recently predicted.

Calling a recession two years out is very difficult, if not impossible. Many things could change. For instance, a favorable resolution to the US-China trade war, perhaps driven by the Wall Street turmoil, could inspire a lasting rebound in the stock market and real economy alike.

And the big wildcard is the Fed and interest rates. No one, not even the Fed, knows exactly how high interest rates need to get before they act as a brake on the economy.

But the Fed's rate hikes are already having an impact on the frontline of the real economy: the housing market. Sales have slowed down in recent months as homebuyers adjust to the seven-year high in mortgage rates, changes to the tax law and affordability issues. Homebuilder stocks are in a bear market.

Will the Fed come the rescue?

Thankfully, the housing slowdown doesn't seem to pose the same systemic threats that it did a decade ago.

"Even if the market were to roll over, it doesn't have the capacity now to wreck the economy," Ian Shepherdson, chief economist at Pantheon Macroeconomics, wrote to clients on Monday.

Still, the inability of the housing market to absorb rate hikes could be a canary in the coal mine for the broader economy.

Invesco's Hooper believes the Fed, responding to the looming economic slowdown and trade wars, "is likely to take its foot off the accelerator" in 2019.

Goldman Sachs, on the other hand, thinks warming inflation will cause the Fed to hike five more times by the end of 2019.

Michael Wilson, equity strategist at Morgan Stanley, similarly told clients on Monday that Fed officials aren't likely to come to the rescue because they're "simply doing their jobs."

"We are not expecting the Fed to bail out equity market participants," Wilson wrote.