What made 'Celebrating America' soar 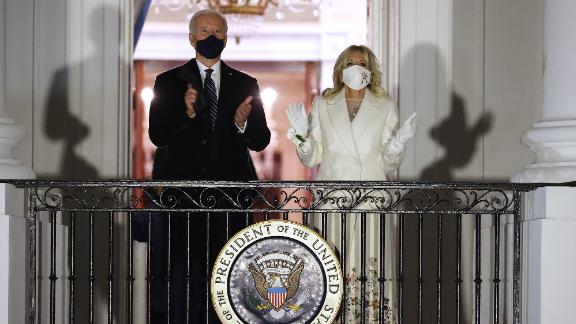 President Joe Biden and first lady Jill Biden were seen on the Blue Room balcony above the White House South Lawn watching the fireworks that closed out the Inauguration Day events.

Other inaugural celebrations have festooned chilly Washington, DC, nights in white ties, gilded gowns, and crowded dance floors. Not this one.

Forget the imperial pomp, gaudy bunting, multi-kilowatt star power summoned, say, 60 years ago on this same night when John F. Kennedy, the first Roman Catholic President and the youngest man ever elected, was feted by a pageant of stars gathered together by his friend Frank Sinatra and brother-in-law Peter Lawford. The performers that night were Ethel Merman, Harry Belafonte, Ella Fitzgerald, Nat King Cole, Gene Kelly ... you get the idea.

That was 1961. And how in 2021, in the middle of a pandemic, do we celebrate the inauguration of Joseph R. Biden Jr., the second Roman Catholic President and the oldest ever elected? Can't party with Covid-19.

So, would you settle for something like ... I don't know ... a digital pep rally?

If you've watched Joe Biden run for office or deliver a stemwinder sometime during his 36-year run in the US Senate, you know how good a cheerleader he is for the large-d-and-small-d democratic faith.

Maybe it was providential, then, that Joe Biden's Very Big Day was capped Wednesday night by the first and maybe (one fervently hopes) last socially distant inaugural celebration, mostly live and nationally televised, mostly, from the Lincoln Memorial.

Even if you didn't know who was on the guest list for "Celebrating America" in advance, it only took a couple of guitar strokes sheathed in darkness to let you know that The Boss was going to set the table for this one.

And Bruce Springsteen, with grizzled assurance and a veteran's panache, opened the proceedings all by himself, in a pea jacket and a weathered axe, with "Land of Hopes and Dreams." His lyrics carried forth the hard-driving big-ticket effects of the musical performances at the swearing-in ceremonies almost eight hours earlier with Lady Gaga's stirring performance of "The Star-Spangled Banner" and Jennifer Lopez's laser-focused mix of "America the Beautiful" with Woody Guthrie's populist anthem, "This Land is Your Land."

Springsteen's lyrics and minimalist delivery pretty much picked up where Guthrie's left off: "... this train, dreams will not be thwarted/This train faith will be rewarded/This train hear the steel rails singing/This train, bells of freedom ringing ..."

Springsteen said before he began that he was cold and host Tom Hanks looked and sounded somewhat shivery and slightly creaky as he welcomed millions of viewers to an all-but-vacant Capitol Mall. Hanks' tone and the prevailing atmosphere seemed less like a celebration at first and more like the start of an earnest, but semi-solemn mass Zoom meeting bridged by brass fanfares.

It soon became clear, though, that this 90-minute broadcast wasn't a party designed solely for the glitterati and well-heeled corporate donors and politicos. "Celebrating America" delivered pretty much what it promised: a cross-country salute to front line workers -- teachers, nurses, delivery truckers -- who, in the prevailing sentiment of the night's narrative, kept the country going, educated its children, helped its needy, cared for its sick in the past ten months of shutdown and economic trauma.

They had their say -- as did both Biden, who, standing in near-ghostly light in front of the text of the Gettysburg Address on a Lincoln Memorial wall, provided variations on themes delivered in his inaugural address by warning once again of the unprecedented crises facing America, requiring of citizens "the most useful thing in a democracy: unity." The newly minted, history-making Vice President Kamala D. Harris also had her own spot-lit moment, chiming in with her own encouraging words for Americans and insisting that however daunting those crises alluded to by the President, "American aspiration" would help get them through.

The pre-taped musical interludes -- as musical interludes go -- were a mixed bag: Jon Bon-Jovi warbling George Harrison's "Here Comes the Sun" as the sun was rising over a Miami pier; Justin Timberlake and Ant Clemons meeting up in a Memphis stage to sing of "Better Days" ahead (the neon-lit grit of the scenery upstaging the pop stars); Tim McGraw and Tyler Hubbard duetting on "Undivided"; John Legend hurling "Feeling Good" live into the dark District skies; Lin Manuel-Miranda reciting one of the President's favorite verses from Seamus Heaney's "The Cure of Troy."

As pep rallies go, it was well organized. But it didn't quite make one's heart levitate -- until towards the end when Demi Lovato pretty much saved the night with a breathtaking cover version of the late Bill Withers' "Lovely Day" that was braced by a heartwarming human quilt of Americans of all races, genders, ages and regions lip-synching, dancing and vogue-ing to Lovato's vocals. Little wonder that the President and the first lady were shown dancing with one of their grandchildren to the music before Katy Perry's vocal fireworks helped set off the biggest display of actual fireworks anybody could remember seeing on the Mall.

I guess pyrotechnics are easy when you don't have to move a lot of people out of the way. Never mind. Another Inaugural Ball tradition was broken Wednesday night. After all, as Biden and Harris indicated, there's a lot of work to do Thursday.