In 60 seconds, AOC shows she's the future of the Democratic Party 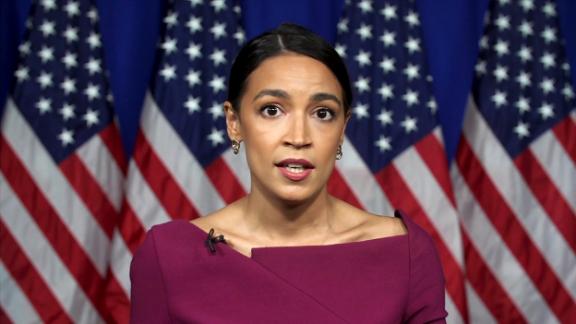 Rep. Alexandria Ocasio-Cortez is good at doing more with less. She won her congressional race with way less money than her incumbent opponent and none of the institutional support. She took the demeaning behavior she was shown as a lawmaker and used it to give voice to all the women who are called derogatory names. She built an IKEA bookstand on her own Instagram Live, making do when she didn't have the proper tools. At the Democratic National Convention on Tuesday -- in just 60 seconds -- she made the case for a future that will guarantee health care and "repair the wounds of racial injustice, colonization, misogyny and homophobia."

This is all not to praise her resourcefulness but to say plainly that if she can do this much with so little, she can do more with more.

For her remarks at the convention -- the largest TV platform Democrats have to reach Americans -- Ocasio-Cortez was allotted the amount of time it usually takes to order a pizza. This didn't seem like a smart move by the Democrats in charge of that decision, and not because she can't deliver a good speech in 1 minute; she can be memorable in 280 characters on Twitter. So, it's not surprising her 60 seconds speaking in support of Sen. Bernie Sanders brought down the (virtual) house. Because quite simply, she's the future of the party.

It wasn't just the Republican Party that was forever changed by the 2016 election. We all watched Donald Trump get elected to the White House. Despite a history that includes allegations that he has assaulted women (he has denied this), and has conducted shady financial dealings, despite his racist comments, unwillingness to learn how government works, and allegations that he has openly solicited help from a foreign adversary, most Republican leaders were prepared to look the other way. And now we've all seen where nearly four years of that has gotten us.

Watching this horror unfold has dramatically changed the Democratic Party, too, in ways its convention speaking lineup might not suggest its leaders understand. In 2018, a wave of first-time candidates took on the enormous challenge of running for office, and they looked very little like the legislative bodies they would join. The new class of elected officials is the youngest, most female, and most diverse in US history — and it reflects a changing electorate. By 2045, America, not just the Democratic Party, is projected to be "minority white." The millennial generation eclipsed the Boomers in size last year. And women have long had the majority, they've just never gotten to enjoy its advantages.

American politics in 2028 or 2032 will not be made up of voters and candidates who look like the white suburban Cleavers -- and that hasn't been the Democratic Party's reality in a long time.

On Tuesday night, Ocasio-Cortez spoke directly to the American people that Democrats need in 2020 -- those who do not see themselves represented in the current political machinery, one that typically rewards the wildly wealthy with speaking slots and massively disproportionate shares of our national revenue. She decried the "unsustainable brutality of an economy that rewards explosive inequalities of wealth for the few at the expense of long-term stability for the many, and who organized an historic, grassroots campaign to reclaim our democracy."

Tuesday's convention smartly focused on the lived experience of elected officials -- Joe Biden's middle-class upbringing but also those of the Democrats swept into office in the last few years who opened the night by talking about their own challenges facing eviction notices and losing loved ones to gun violence.

It was surprising to see Stacey Abrams, one of the most gifted speakers in American politics and a strong contender for vice president this year, close out the otherwise well-selected keynote panel of young Democrats who are just now being introduced to America

Abrams is a sought-after speaker for Democratic events across the country, but she also was not given her own slot and had little more than 60 seconds to make her case. There wasn't time for her to explain how her preacher family shaped her understanding of government, which was a shame, because it's electrifying when she does it.

She used her moments to rally the base to fight "voter suppression at home and authoritarians abroad" and echoed a key point regularly made by Ocasio-Cortez: "We don't elect saviors ... we elect people who hear our dreams and work to make them real."

Abrams excelled in her limited role, just as she shone delivering the usually thankless State of the Union response, but like Ocasio-Cortez, she can do more with more.

Day Two of the convention showed important signs that Democrats understand they must elevate the voices of the women and men who will be cleaning up after the Republicans, addressing the crisis of income inequality, ensuring public health, and stopping climate change before it ends us. Next time, they should cede more space to the women who will lead that fight.

Abrams and Ocasio-Cortez will have plenty of opportunities to shoehorn complicated policy solutions into absurdly small-time frames, if and when they make their own runs for president. Until then, we could all benefit from them taking more time.

If the COVID shot is free, why show insurance? Expert explains

Former Thurston teacher accused of sex abuse back in jail