Roger Stone judge claws back rule of law from Trump 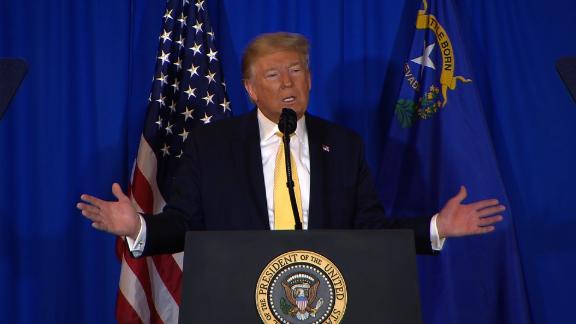 "The truth still exists. The truth still matters," Judge Amy Berman Jackson declared on Thursday, as she sentenced Roger Stone, a close associate of President Donald Trump to 40 months in prison for crimes he committed to protect the President and later himself as prosecutors closed in on him.

Notice the word "still" in her statement. It subtly signals that the judge sees what we all do, a President deliberately denying the facts, dismissing the truth -- and in recent days, a President brazenly assaulting the rule of law.

Indeed, Stone's sentencing turned into a microcosm of the battle to save the rule of law in this country, a battle so important that it lies on the line that separates democracy from autocracy. That's why the case of Roger Stone -- the flamboyant, histrionic character, another in the bizarre cast of hustlers and scammers who have taken center stage during the Trump era -- is much more than just another file in a court's docket.

On Thursday, in Judge Jackson's courtroom, the rule of law fought back.

It was last week when we saw the President tweet a complaint about the handling of the case, and Attorney General William Barr immediately launch an unprecedented interference in the case. Prosecutors had recommended to the judge a harsh sentence for Stone. Trump protested, and Barr suddenly reversed the recommendation.

The outcry prompted Barr to claim Trump had nothing to do with his decision, and to put what many think was no more than a public-relations show of distancing himself from the President, claiming Trump's tweets are making it impossible for him to do his job.

The attorney general has been doing Trump's bidding over and over. The link between Trump and Barr threatens to destroy the independence of the judiciary, which itself threatens to unravel trust in America's system of justice, one of the most harmful legacies a Trump presidency could leave in its wake.

Following the Trump-Barr interference, the four original prosecutors in the Stone case resigned. But Thursday's battle in the courtroom showed that, at least for one day, the rule of law triumphed in Washington.

Trump has tweeted incessantly, claiming the case is political and Stone has done nothing wrong. Judge Jackson disagreed vehemently. Stone, an old Trump associate, tried to reach WikiLeaks during the 2016 election in an effort to help Trump. WikiLeaks released emails hacked by Russia from the Democratic Party, which may have helped Trump win the election.

Trump talked to Stone about WikiLeaks, according to trial testimony from former Trump aide Rick Gates, but Trump told Robert Mueller's investigators in a sworn statement that he didn't recall such a discussion. Even after Mueller had Stone indicted and arrested, Stone committed more crimes, lying to Congress and threatening witnesses.

He even posted a picture of Judge Jackson with a rifle's crosshairs next to her head.

Stone's conduct was an effort to threaten and intimidate the court, the judge said, something that is "intolerable to the rule of justice."

She rejected the dismissive claim that this was "Roger being Roger." Efforts to minimize the case, particularly by the man who Stone was defending -- the President -- carried no weight in her courtroom.

Judge Jackson rejected the President's claim that the case is politically driven, saying it stemmed from Stone's insecurity, his need for attention, and his decision to inject himself in the WikiLeaks controversies.

It wasn't just the judge standing up to the President. When the judge asked prosecutors, the ones who replaced those who resigned, which sentencing memo the Justice Department was using, they said the original, the one that came before Barr's interference. And they apologized for the confusion.

The sentence ended up being shorter that the recommendation that put Barr's intervention in the spotlight. The judge said she had found it excessive.

Thursday's courtroom drama unfolded against the continuing backdrop of a President interfering relentlessly, publicly, in a criminal case, one involving a friend and associate convicted of crimes intended to help him. Any part of that statement would have been unthinkable before this administration. But Trump's tweets go on and on.

And that's just the part we see. We can only wonder what else he is doing behind the scenes. His posse of enablers and cheerleaders on Fox News add to the climate of siege against judicial independence.

Without any sense of shame, just two days before Stone's sentencing, Trump bypassed formal procedures for granting clemencies and forgave the misdeeds of 11 convicted criminals, including a former contestant on his "The Apprentice" TV show, along with, among others, campaign contributors and friends of friends.

The Stone case is the latest battle for those trying to stop the autocratic drift in America, to defend the rule of law and the independence of the judiciary from a President who has openly declared he can do whatever he wants, as dictators can.

The Stone sentencing was a reminder that justice "still" exists in this case, but even that will be short-lived. Trump is getting comfortable exercising his pardon power, ideal for a man with autocratic tendencies.

'She had a bright future': Victim in fatal Highway 126 crash remembered

Highway 126 back open after fatal crash