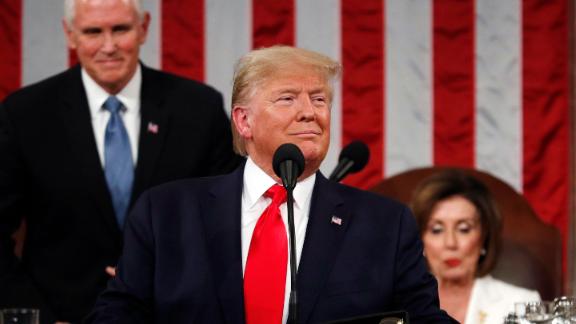 In Part 2 of his State of the Union address before a divided Congress, President Donald Trump talked about his vision for funding the military and education, improving equal opportunities for minorities and introduced Venezuelan opposition leader Juan Guaidó as his guest.

President Donald Trump talked about a lot of things in his State of the Union address and painted an inspiring picture of the United States under his leadership.

Here are 13 big things he left out:

Climate change -- Trump did mention that he wants the US to plant more trees, but he didn't mention the climate crisis, which many people think will be the defining issue of our time. He bragged about US energy independence. He didn't mention that it comes because of increased oil production. Many Democrats want to transition the US away from fossil fuels altogether. Trump has drawn criticism for mocking teenage climate activist Greta Thunberg and also called climate change activists "prophets of doom" during a speech at the World Economic Forum in January.

Obamacare -- Trump railed against "Medicare for All." He didn't name that proposal from Sens. Bernie Sanders and Elizabeth Warren, but he did warn against socialism. He did not, however, offer his own plan for a new health care system even as his administration tries to suffocate the current Affordable Care Act, more commonly known as "Obamacare." He again promised to protect access to coverage for people with pre-existing conditions. He also didn't mention that the entire law could be struck down by the Supreme Court, something his Justice Department supports.

Election security -- Trump's campaign manager suggested Monday night that the Democratic Iowa caucuses were "rigged." Trump in 2016 said the same about the general election before he won. Given his own invitation for multiple foreign countries to investigate former Vice President Joe Biden, it makes sense for him to avoid the subject of election security, but that doesn't make its absence less awkward. Congress has not been ignoring the issue.

Travel ban -- Three years after he first tried to restrict people from certain countries traveling to the US, the administration just recently expanded its travel ban to include six more countries, sparking controversy for targeting Africa.

$1 trillion deficits -- Given Republicans' focus on the issue of government spending in the pre-Trump era, it's remarkable that a Republican President would leave out of his address that the federal deficit topped $1 trillion in 2019. Could be because the tax law he signed has made the US deficit spiral. The national debt is getting bigger too.

Impeachment -- He's the third President ever to be impeached by the House and he's likely to be acquitted by the Senate on Wednesday, but he didn't bring it up when he was standing in front of House Speaker Nancy Pelosi. He did ignore her offer of a hand shake. She stood and ripped a copy of his speech when he was done talking.

Bipartisanship -- Trump needs Pelosi to pass legislation. But he didn't mention her contribution to helping him achieve the USMCA, the trade deal with Canada and Mexico, or the family leave for federal workers. He did call twice for bipartisan legislation, but he not talk about working across the aisle.

North Korea -- Remember when Trump was promising peace with North Korea and an end to that country's nuclear program? Seems like a long time ago.

Women voting -- Democratic women wore white to commemorate 100 years of the right of women to vote in the US. The 19th amendment was ratified in August of 1920. While Trump did mention equality, he didn't mention this important milestone. When he mentioned Wyatt Earp and Annie Oakley, he could have thrown in Elizabeth Cady Stanton or Susan B. Anthony.

Bailouts for farmers -- Trump said his trade deal with China -- although half of what he originally promised -- is a success. And he credited his tariffs imposed on China. He forgot to mention the many billions of dollars US taxpayers had to give American farmers to help them through the China's countermeasures. Even with the bailouts, US farm bankruptcies jumped 20% in 2020.

DREAMers -- Trump spent a lot of time bragging about his border wall and his immigration policy. He didn't mention the most controversial aspect of that policy, which is his decision to end the Obama-era program that shielded certain people brought to the US as children from deportation. Congress hasn't solved that problem. It will have to. The Supreme Court could make a decision before the 2020 election.

Inequality -- Trump argued that lower income Americans have seen their wealth rise during his administration. He offered it as a sort of rejection of the idea of inequality, which has animated a lot of the Democratic primary this year. Inequality is and remains a serious issue in the US.