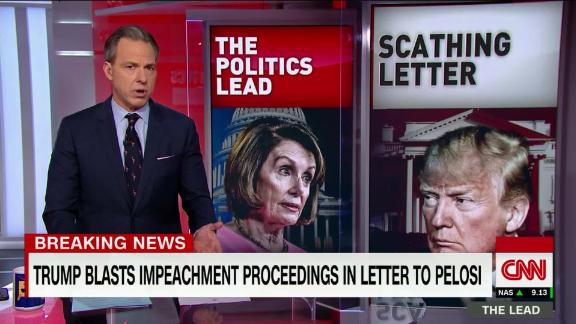 It was on White House letterhead. It read like a string of President Donald Trump's tweets.

And it was just as dishonest.

On Tuesday afternoon, Trump released a six-page letter to House Speaker Nancy Pelosi in which -- employing his distinctive vocabulary and punctuation -- he blasted Democrats' push to impeach him, defended his dealings with Ukraine and touted his accomplishments in office.

Like much of his previous rhetoric about Ukraine and impeachment, much of the letter was false or misleading.

Trump repeated multiple false claims that have been debunked on numerous occasions. He also delivered some new claims that were false, misleading or lacking in context.

We're not finished going through all of Trump's claims in his letter, but here are some early fact checks.

Trump decried "the so-called whistleblower who started this entire hoax with a false report of the phone call that bears no relationship to the actual phone call that was made."

Facts First: The whistleblower's account of Trump's July call with Ukrainian President Volodymyr Zelensky has been proven highly accurate. In fact, the rough transcript released by Trump himself showed that the whistleblower's three primary allegations about the call were correct or very close to correct. You can read a full fact check here.

Trump claimed the whistleblower "disappeared" because "they got caught, their report was a fraud."

Facts First: There is no evidence the whistleblower has disappeared, let alone that they have vanished because they were shown to be inaccurate. Whistleblowers do not have an obligation to speak publicly after filing their anonymous complaints.

Facts First: Sondland, Trump's ambassador to the European Union, did testify that Trump told him this -- but Sondland nonetheless said that, in his own opinion, there was indeed a quid pro quo.

Trump wrote that the rough transcript of his call with Zelensky "was immediately made available."

Facts First: The call occurred in July. Trump released the rough transcript in September, after the public learned of the existence of the whistleblower complaint about the call.

Trump wrote, "President Zelensky has repeatedly declared that I did nothing wrong, and that there was No Pressure. He further emphasized that it was a 'good phone call,' that 'I don't feel pressure,' and explicitly stressed that 'nobody pushed me.'"

Facts First: Zelensky did say there had been "no pressure" from Trump and made other statements to that effect, but he has not gone so far as to say Trump did nothing wrong.

In an interview published by Time magazine in early December, Zelensky did say, "Look, I never talked to the President from the position of a quid pro quo. That's not my thing." But Zelensky continued: "I don't want us to look like beggars. But you have to understand. We're at war. If you're our strategic partner, then you can't go blocking anything for us. I think that's just about fairness. It's not about a quid pro quo. It just goes without saying."

Trump wrote, "I said to President Zelensky: 'I would like you to do us a favor, though, because our country has been through a lot and Ukraine knows a lot about it.' I said do us a favor, not me, and our country, not a campaign. I then mentioned the Attorney General of the United States."

Facts First: It's worth noting that Trump only adopted this explanation for his "favor" comments more than two months after he released the rough transcript of the July call. Trump quoted himself accurately here -- but in between his "favor" sentence to Zelensky and his mention of the attorney general, he had asked Zelensky to look into a debunked conspiracy theory about Democratic computer servers. In his next series of comments to Zelensky, after Zelensky spoke, Trump asked Zelensky to look into former vice president and current Democratic presidential candidate Joe Biden.

Trump wrote that Biden "used his office and $1 billion dollars of U.S. aid money to coerce Ukraine into firing the prosecutor who was digging into the company paying his son millions of dollars."

Facts First: There is a lot wrong with this claim. The $1 billion in question was a loan guarantee, not an aid payment. The prosecutor, Viktor Shokin, was widely viewed by American diplomats and in the international community as corrupt; Biden was pursuing official policy in pushing for Shokin's ouster. And the prosecutor's former deputy has said that the investigation into the company where Biden's son, Hunter Biden, sat on the board of directors was dormant at the time Joe Biden applied the pressure.

Trump wrote, "Biden openly stated: 'I said, "I'm telling you, you're not getting the billion dollars"... I looked at them and said: "I'm leaving in six hours. If the prosecutor is not fired, you're not getting the money." Well, son of a bitch. He got fired.'" Even Joe Biden admitted just days ago in an interview with NPR that it 'looked bad.'"

Facts First: Trump was not entirely clear on what he meant by "it," but he left open the impression that Biden had recently told NPR that his effort to oust Shokin, or the 2018 video of him telling the story of his effort to oust Shokin, "looked bad." In fact, Biden's "looked bad" comment was about something different: Hunter Biden's position on the board. Specifically, Biden said "the appearance" of Hunter Biden's presence on the board "looked bad and it gave folks like Rudy Giuliani an excuse to come up with a Trumpian kind of defense."

Trump wrote, "Now you are trying to impeach me by falsely accusing me of doing what Joe Biden has admitted he actually did."

Facts First: Democrats are accusing Trump of abuse of power for soliciting foreign interference in the presidential election and for trying to use official acts to pressure the Ukrainian government into doing something that would help him personally. Biden has not admitted to anything of the sort.

Trump wrote, "I have been denied the most fundamental rights afforded by the Constitution, including the right to present evidence, to have my own counsel present, to confront accusers, and to call and cross-examine witnesses."

Facts First: The constitutional rights of criminal defendants do not apply to public officials in a House of Representatives impeachment process, though Trump is free to argue that they should. Trump's counsel was denied the opportunity to participate in House Intelligence Committee impeachment hearings but was invited to participate in House Judiciary Committee hearings; Trump's counsel declined that opportunity. House Republicans were allowed to have their lawyer question witnesses at the House Intelligence Committee.

Trump wrote, "More due process was afforded to those accused in the Salem Witch Trials."

Facts First: Trump might have meant this as a non-literal figure of speech, but as a factual matter, the claim is absurd. (Salem's current mayor told Trump to "learn some history.") Nineteen innocent people were hanged after they were accused of witchcraft in the trials of the late 1600s. The courts accepted "spectral evidence" from dreams. Some of the accused were tortured into confessions.

Trump wrote of Hillary Clinton: "Your chosen candidate lost the election in 2016, in an Electoral College landslide (306-227)."

Trump said Pelosi has a policy of "open borders."

Facts First: While Pelosi wants a more liberal immigration policy than he does, she does not support completely unrestricted migration. She has repeatedly endorsed funding for border security measures aside from the President's proposed wall.

Trump again claimed the cost of the Mueller investigation was "45 million dollars."

Facts First: The investigation cost $32 million, according to figures released by the Justice Department, and the government is expected to recoup about $17 million as a result of the investigation, most from former Trump campaign chairman Paul Manafort, according to a CNN analysis of the sentences handed out to people charged by Mueller.

Trump said that the world now knows that former FBI Director James Comey is "one of the dirtiest cops our Nation has ever seen."

Facts First: We give Trump wide latitude to express opinions about public figures, but the December report from Justice Department Inspector General Michael Horowitz presented no evidence that Comey was corrupt in any way. Horowitz found significant errors in FBI work connected to the Russia investigation, and rejected Comey's claim of vindication, but he did not make any finding accusing Comey of deliberate malfeasance.

Facts First: While there has been a reduction since May, it is only a reduction from the high point of the Trump era; the total number of people apprehended at the southwest border, a proxy measure for the number of actual crossings, has been higher under Trump than it was in the late Obama era.

Trump boasted of the US "becoming the world's top energy producer."

Facts First: The US became the world's top energy producer in 2012, according to the government's Energy Information Administration -- under Obama, whom Trump has repeatedly accused of perpetrating a "war on American energy."

Trump claimed "a completely reformed VA with Choice and Accountability for our great veterans."

Facts First: The Veterans Choice program was signed into law by Obama in 2014. Trump signed a law in 2018 to expand and modify the Choice program, the VA MISSION Act, but he did not create Choice.

Trump touted "the building of the Southern Border Wall."

Facts First: As of December 6, the date of the latest official update from Customs and Border Protection, no miles of border wall had been constructed where barriers did not previously exist. (Construction had started on some new barriers, the government said.) Trump has argued that the replacement of old barriers with newer barriers should count as the building of his wall; as of December 6, 90 miles of replacement barriers had been erected.

Man arrested after fire breaks out at U-Haul

Eugene couple back home after month on cruise ship