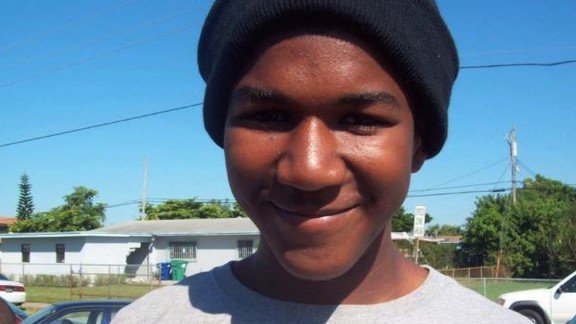 After George Zimmerman killed Trayvon Martin in 2012, it set off a nationwide debate about race, policing and stand your ground laws.

It was the case that launched the Black Lives Matter movement and reminded the country that we weren't living in a post-racial society.

The 2012 shooting death of Trayvon Martin and the acquittal of George Zimmerman, the man who killed him, hit close to home for many black families and forced nationwide conversations about race in America.

News that Zimmerman is suing Trayvon's family for $100 million in damages this week has put the polarizing details of this case back in the national spotlight.

Martin's death forced a conversation about race in America

Seven years ago, the 17-year-old Trayvon was holding a can of Arizona iced tea and a bag of Skittles as he walked from a convenience store to the home of his father's fiancée in Sanford, Florida.

He was wearing a hoodie.

Zimmerman, a neighborhood watch captain, spotted him and called 911 to report "a suspicious person" in his gated community. In another 911 call, a neighbor had been speaking with a dispatcher when a voice screamed, "Help, help!" in the background, followed by the sound of a gunshot.

Zimmerman said he shot Trayvon in self-defense after the unarmed teen hit him, knocking him to the ground. Critics said Zimmerman was unjustified in confronting Trayvon, particularly since Zimmerman disregarded a police dispatcher's advice to stop following the teen.

Zimmerman's supporters said he was exercising his Second Amendment right to bear arms and Florida's "stand your ground law" could have given him immunity.

After Zimmerman was acquitted of a second-degree murder charge, thousands of people took their anger over the verdict to the streets. They wore black hoodies and chanted Trayvon's name. In fact, the image of Martin wearing a hoodie became iconic. Professional athletes wore hoodies, and protesters repeated the mantra: "I am Trayvon Martin" to express solidarity.

Even then-President Barack Obama weighed in after the verdict in a surprise appearance in the White House briefing room, saying, "Trayvon Martin could have been me 35 years ago."

The acquittal inspired the hashtag "#BlackLivesMatter," which evolved into a rallying cry and a national movement in 2014 when a police officer fatally shot Michael Brown.

Trayvon's name still comes up whenever an unarmed black person is killed. He is often remembered along with Brown, Eric Garner, Tamir Rice, Philando Castile and many others.

A mourning mother turned into an activist

Shortly after his death, Trayvon's mother, Sybrina Fulton, said she realized she had no other choice than to speak up and take action against gun violence.

Fulton created The Trayvon Martin Foundation with Trayvon's father, Tracy Martin, "out of a need to bring awareness to ending senseless gun violence," according to the nonprofit's website. They testified in opposition to "stand your ground" laws and co-authored "Rest in Power: The Enduring Life of Trayvon Martin."

Fulton has shared the pain of losing a child with a growing group of mothers whose sons' deaths have become symbols of racial injustice and police brutality.

Earlier this year, she announced that she's running for a seat on the Miami-Dade County Board of County Commissioners.

"At first, I didn't want to be the voice for Trayvon after he died but I decided I have no choice. Now, I'm called to act, and called to serve," Fulton said in a roughly two-minute video posted on her Instagram account. "It became clear to me there's an opportunity to turn our family's tragedy into something positive for many other families."

The lawsuit against Trayvon's parents and others is just the latest controversy for Zimmerman.

A few weeks after his acquittal in 2013, Zimmerman was pulled over for speeding in northern Texas and sent on his way with a warning.

Then that November, police arrested him at his then-girlfriend's home in Apopka, Florida. He was held on suspicion of aggravated assault and misdemeanor counts of domestic violence battery and criminal mischief, but the woman later asked that the charges be dropped. Zimmerman was never prosecuted.

In January 2015, another girlfriend accused Zimmerman of throwing a wine bottle at her, leading to his arrest. The woman later backed off her claims, and charges were never filed, police said.

Months later, he was shot in a road rage incident in Lake Mary, Florida, and suffered minor injuries. The suspect was sentenced to 20 years in prison after a trial.

Zimmerman sparked outrage in 2016 when he attempted to auction off the gun that he purportedly used to kill Trayvon, which he described as a "piece of American history."

A year later, Zimmerman was accused of stalking a private investigator who had been hired by a production company that was working on a documentary about Trayvon's life. Deputies said Zimmerman called the private investigator 55 times, left 36 voicemails, texted him 67 times and sent 27 emails over a nine-day span, according to CNN affiliate WKMG.

Zimmerman's lawyer, Larry Klayman, filed a lawsuit Wednesday alleging that there was a conspiracy by the family, their lawyer Ben Crump, and others to frame him.

Crump and Trayvon's parents have denied the allegations.

"I have every confidence that this unfounded and reckless lawsuit will be revealed for what it is -- another failed attempt to defend the indefensible and a shameless attempt to profit off the lives and grief of others," Crump said in a statement issued on his and Trayvon's parents' behalf.