Trump's puzzling visit to the hospital 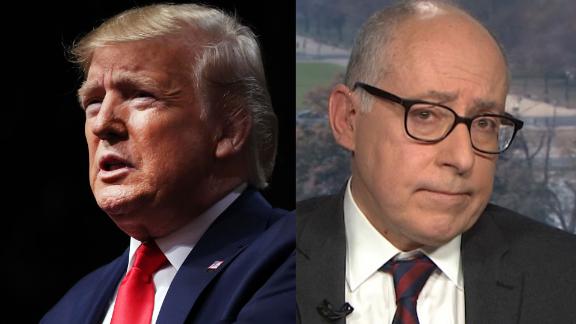 Like a weekend worrier who shows up at the emergency room, President Donald Trump went to Walter Reed National Military Medical Center unannounced for what the White House says were supposedly routine tests. "He's in good health and it was a routine checkup as part of his annual physical," insisted White House press secretary Stephanie Grisham.

Another administration might get the benefit of the doubt in such a case, but after thousands of lies and deceptions, this one deserves nothing of the sort.

The suddenness and the timing of the hospital visit, which lasted for hours, suggest a different explanation.

Probably not since Richard Nixon prowled the White House, whisky in hand, talking to his predecessors' portraits, has a chief executive been under more personal stress than Trump faces in this autumn of his discontent. True to past form, Trump had built a creative response to get himself out of trouble. But instead of helping him, the plot has become a trap that only adds to his woes.

Any human being would suffer seriously under such stress and become subject to the kinds of symptoms -- panic attacks, stomach woes, headaches, anxiety -- that calls for medical intervention. Again, Grisham denied the President had any such health issue.

Last week was one of the worst of his presidency, as one witness after another described the busted scheme to use nearly $400 million in war aid as leverage to get Ukraine to do Trump political favors that would damage his rival Joe Biden and challenge intelligence officials' unanimous finding that Russia attacked the 2016 election to benefit him. (Trump denies that this was his intent in withholding the aid.)

As the world knows, Trump has been sore about the shadow that the Russian propaganda attacks cast over his election and prefers a conspiracy theory version of history that makes him the victim, rather than the beneficiary, of foreign meddling. In this fantasy, Ukrainians were trying to help his adversary Hillary Clinton.

Just why Ukrainians would try to help Clinton by attacking her online seems a mystery, but perhaps the denizens of Trumpworld would come up with an explanation eventually. Meanwhile, the President could keep trying to establish that the theory was true and use it to escape in the event that special prosecutor Robert Mueller (remember he was looking into Trump and Russia?) reported something truly ruinous to his administration.

The Ukraine trapdoor, through which he might dodge Mueller, was the kind of escape mechanism Trump has used in the past to get out of trouble. In his many bankruptcies, he used the law and clever negotiation to protect himself and his brand as creditors took what they could get. And in his personal life, he relied on prenuptial agreements and again, effective lawyers, to end marriages that had broken down.

The Ukraine conspiracy theory dates back to 2016 and may have originated in Russia. It presented a handy alternative reality for both Moscow and Trump, but was so implausible and contrary to the evidence that it was accepted only in right-wing media circles. However, it appealed to the President, who obviously embraced it in the way of the super salesman he has always been.

Indeed, the first rule of salesmanship is that the pitchman must believe in his product with every fiber of his being. Trump's commitment to this rule is evident in all the ridiculous superlatives he heaps upon his own initiatives or statements -- "I have the best words" -- and in his refusal to admit he has ever reversed course. Understanding that the American people would experience any hint of a salesman's doubt as a DO NOT BUY signal, Trump embraces his version of reality so firmly that when he pitches it to the country he seems entirely sincere.

Trump's commitment to the Ukraine conspiracy theories energized the machine that would rescue his presidency. The problem was that this device became a kind of monster that he could not switch off. He had made his demands of Ukrainian President Zelensky, withheld the military aid and involved too many others, from European Ambassador Gordon Sondland to Vice President Mike Pence, in this endeavor.

On the day after Mueller testified, and the President seemed to be in the clear, Trump had the fateful phone call with Zelensky that led to the current crisis.

Those who are puzzled by this self-destructive act should understand that the past suggests that Trump was so committed to selling his alternative theory of 2016, and defeating Biden, that he had no choice. Abandoning the product, even though it posed a monstrous threat to himself, was inconceivable.

Ten weeks later, the man who was able to get himself out of countless jams in the past finds himself trapped by his own devices. Each week seems to be worse than the last, as witnesses testify on Capitol Hill and disgrace piles upon disgrace.

Consider Trump, the man, in this moment and you can imagine a far more reasonable explanation for his sudden trip to the hospital. The man being tested so severely needs much more than a little lab work.