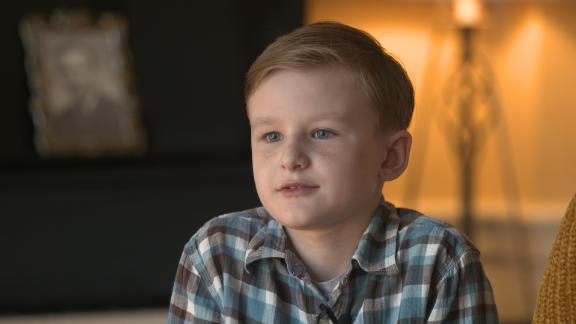 In the nine years that Davidson Whetstone has been alive, his dad has been deployed eight times. Just in time for Veteran's Day, Davidson is releasing the book he wrote with his father, Dave, in between his deployments.

No matter what it looks like out your window, it's a sunny day today, as "Sesame Street" turns 50.

Here's what else you need to know to Start Your Week Smart.

• We salute American veterans. The US takes a day off to honor the roughly 20 million armed forces members who have bravely served in uniform. President Trump will be in New York to help kick off the city's big Veterans Day parade. The day is also known as Armistice Day to mark the end of WWI in 1918.

• DACA heads to the Supreme Court. The program that defers deportation for nearly 700,000 undocumented people brought to the US as children is due to be considered by the land's highest court. At issue is how the Trump administration decided to phase out the Obama-era program. How the justices rule will have a major impact on the presidential race.

• Disney, now streaming. Disney+, the company's much-anticipated streaming service, launches in the US with an exclusive lineup of content from Marvel, Pixar, the "Star Wars" universe and more. Here's a complete list of every title you can binge on.

• The impeachment inquiry goes public. The House Intelligence Committee holds its first open hearings as Democrats build a case against President Trump. Bill Taylor and George Kent, both career diplomats with an inside line on the Ukraine dealings under scrutiny, are set to appear. Due up two days later is former US Ambassador to Ukraine Marie Yovanovitch.

• Trump and Erdogan meet at the White House. Turkey's President is expected to visit just weeks after US forces withdrew from northern Syria, a move that critics said set the stage for Turkey to attack US allies in the battle against ISIS. A day later, Secretary of State Mike Pompeo is due to host global leaders in Washington to discuss the ISIS fight in Syria.

• Country music's biggest night. It's the 53rd Country Music Association Awards, with Reba McEntire and Dolly Parton among the performers. Tune in at 8 p.m. ET on ABC.

• Animal heroes are honored for bravery. At least two working or retired canines are due to be honored with the inaugural Animals in War & Peace Medal. Six posthumous awards also will be given to animals that served in World War I, World War II and the wars in Korea, Vietnam, Afghanistan and Iraq.

• The El Paso Walmart reopens. The Texas store where 22 people were gunned down in August is set to reopen. A grand candela, featuring 22 perforated aluminum arcs grouped into a single 30-foot monument "symbolizing unity and emanating light into the sky," is set to be erected soon in the parking lot.

• Neil Armstrong memorabilia hits the block. You can own classified NASA documents and mementos that left Earth with the first man to walk on the moon. More than 1,400 lots, most from the Neil Armstrong Family Collection, are set to be auctioned off.

• Louisiana goes to the polls. Following big wins for Democrats last week in Virginia and Kentucky, voters in the Pelican State -- which swung hard for Trump in 2016 -- will decide whether to stick with Democratic Gov. John Bel Edwards or pick GOP political neophyte Eddie Rispone.