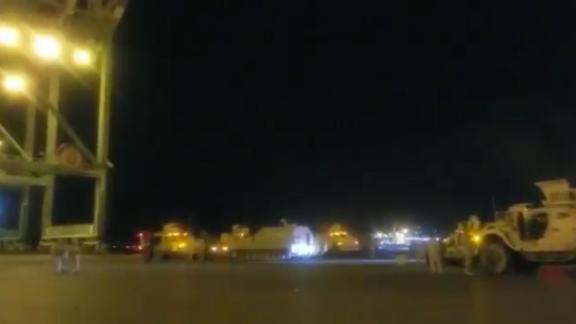 The distinctive shape of a US-made Oshkosh armored vehicle stands out in the early morning darkness at the Yemeni port of Aden, a piece of military hardware that is currently at the heart of a standoff between some American lawmakers and President Donald Trump's administration. CNN's Nima Elbagir reports.

US Sen. Elizabeth Warren criticized US weapons sales to Saudi Arabia and the United Arab Emirates following a new CNN investigation into American-made arms in Yemen.

Warren's new comments came as she tweeted CNN's report, published Wednesday, on a shipment of US-made military hardware to the Yemeni port of Aden last week.

The port is controlled by the Saudi-led coalition in Yemen, whose main partners are continuing to ship American-made weapons into the country despite bipartisan outrage in Congress over the way the US is backing Riyadh in a bloody and bitter conflict.

Writing on Twitter, Warren, who is a candidate for the 2020 Democratic presidential nomination, said:

Step 2: UAE-backed separatist militia gets that equipment & uses it against Saudi-backed govt.

What could go wrong?"

In a second tweet, Warren added: "Last month, I wrote a letter to the @StateDept & @DeptofDefense asking whether continuing to sell our military hardware to the Saudis & Emiratis is a good idea. (Hint: it's not.)"

Warren wrote to US government agencies in October after a previous CNN investigation revealed that US-made weaponry had ended up in the hands of rival militia groups in Yemen -- including UAE-backed separatists -- and were being used to fight the Saudi-supported forces of Yemen's internationally recognized government.

In response to CNN's report on Wednesday, a spokesman for the Saudi-led coalition, Col. Turki Al-Maliki, said "the information that the military equipment will be delivered to a third party is unfounded." The UAE didn't respond to requests for comment, but told CNN last month that there were "no instances when US-made equipment was used without direct UAE oversight. Except for four vehicles that were captured by the enemy."

In February, the Pentagon told CNN it had launched its own investigation, in conjunction with the State Department, into the unauthorized transfer of US weapons in Yemen. Last month, a Pentagon spokesperson told CNN the probe was still "ongoing."

Related Article: Sold to an ally, lost to an enemy

US lawmakers, citing CNN's investigations, have since moved to ban weapons sales to Riyadh and Abu Dhabi. For the first time, they passed the War Powers Resolution against a sitting President in a bid to end US military support for the Saudi-led coalition in Yemen.

The War Powers Resolution was approved by the House and Senate but was vetoed by Trump in April.

A Texas demolition company accidentally tore down the wrong house