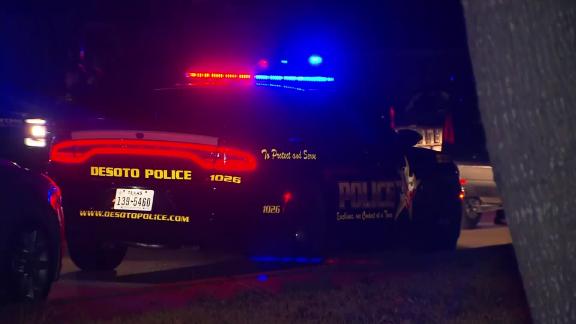 An off-duty Texas police officer shot his adult son after mistaking him for an intruder in his home. CNN affiliate KTVT has more.

A Texas police officer shot his adult son Saturday, thinking he was an intruder.

Dispatchers received a call around 6 p.m. CDT from a man reporting a shooting at his home. The man said he was an off-duty Dallas officer who mistook his son for an intruder and accidentally shot him, according to a release from the DeSoto Police Department. DeSoto is a city south of Dallas.

When officers arrived on scene, they found the victim bleeding from his right forearm. The victim was taken to a hospital with non-life-threatening injuries, the release said.

"It was a startling situation, it was an accident," Pete Schulte, DeSoto police spokesman, told CNN affiliate KTVT-TV. "And fortunately, we're very happy that it did not result in serious bodily injury or death."

No charges have been filed and no arrests were made, Schulte said.

"The DeSoto Police Department has treated this like every other case that we would have had and we would've handled it the exact same way that if any charges are appropriate later on, they'll be forwarded over to the DA's office for them to make a decision," Schulte said.

The identities of the officer and his son are not being released until details are confirmed, the release said.