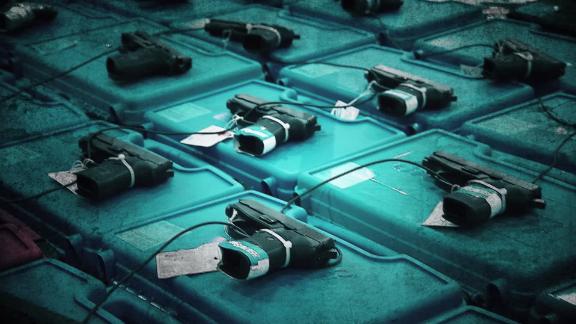 The recent shooting in and around Odessa, Texas, is shining new light on an old problem: In many states, a person barred from owning a gun under the law can still buy one in a private sale, without a background check. CNN'S Drew Griffin reports.

The recent shooting in and around Odessa, Texas, is shining new light on an old problem: In some states, a person barred from owning a gun under the law can still buy one in a private sale, without a background check.

The West Texas shooter, Seth Ator, 36, failed a background check when he tried to purchase a gun in 2014, because he had been deemed "a mental defective" by a judge, according to law enforcement sources. He was later able to buy a gun from a private seller. He killed seven people and wounded 25 others on August 31 before being apprehended and killed by the police in a shootout. The person who sold Ator his gun is being investigated as an unlicensed dealer, according to a law enforcement source.

Under federal law, gun dealers -- that is, people "engaged in the business" of selling guns -- are required to have a license and conduct background checks. But private sellers, those who make "occasional sales" for a "personal collection or for a hobby," can sell guns without looking into the buyer's background. The law is vague and sets no limit on the number of guns a private citizen can sell, but guidelines from the Bureau of Alcohol, Tobacco, Firearms and Explosives say those "repetitively buying and selling firearms" for profit are unlicensed dealers, which is illegal.

A CNN investigative series earlier this year found that some unlicensed gun dealers exploit the vagueness of the law to sell scores or hundreds of guns, serving as a funnel for weapons into the hands of violent felons and others prohibited from possessing them. A review of more than 50 cases of unlicensed dealers found guns that have been traced to homicides, armed robbery, and suicide.

One California man, who now repents after serving time for a 2014 road-rage shooting that nearly killed a young aspiring engineer, told CNN he never would have used the gun if he had bought it under his own name from a licensed dealer. "I wouldn't even have it in my car like that," he said. The gun traced back to a prominent family of farmers in Washington state who sold guns without a license for years.

Like that weapon, some guns sold by unlicensed dealers ended up being used in crimes in states and cities that carefully regulate gun sales themselves but are helpless to stop this below-the-radar flow of weapons into the hands of local criminals. And even when law enforcement targeted unlicensed dealers, CNN found, some continued selling guns even after the ATF explicitly warned them to stop. When the dealers were charged, their punishment under the vague law was often light.

Gun control advocates say the problem would be significantly minimized if federal law required that all sellers -- even private ones -- conduct background checks. Some states have such laws on the books. Texas does not.

"Loopholes in our background checks system allow unscrupulous gun dealers and traffickers to operate in the shadows. That has deadly consequences for the safety of our communities and law enforcement officers sworn to protect us," said David Chipman, a former ATF special agent who is now senior policy advisor at Giffords, a leading gun violence prevention nonprofit. The Odessa shooter's ready access to an AR-15-style rifle, Chipman said, showed how vital it was to pass a universal background check law.

American voters overwhelmingly support universal background checks for gun purchases -- a Quinnipiac poll found 93% support for such a measure two weeks ago. In February, the House responded to that demand by passing a universal background check bill, with bipartisan support. So far, however, Senate Majority Leader Mitch McConnell has blocked that legislation in the Senate. He said last week that he would not bring any gun bill to the Senate floor unless it has the support of President Donald Trump.

Trump, who has at times said he would support stronger background checks, backed off those statements in August after talking to the head of the National Rifle Association, among others. The NRA says on its website that it opposes universal background checks "because background checks don't stop criminals from getting firearms, because some proposals to do so would deprive individuals of due process of law, and because NRA opposes firearm registration."

But for years, the availability of guns without background checks in states like Texas have given those restrictions limited impact. In 2005, for example, CNN correspondent Drew Griffin found it simple to buy a powerful .50-caliber rifle that he found online, at a home in suburban Houston. The transaction required no background check and took about 20 minutes.

US Rep. Peter King, a Republican from New York who is one of the sponsors of the House universal background check bill, said that the NRA has worked to sow fear among his colleagues that even enormously popular gun regulations constitute a threat to the Second Amendment.