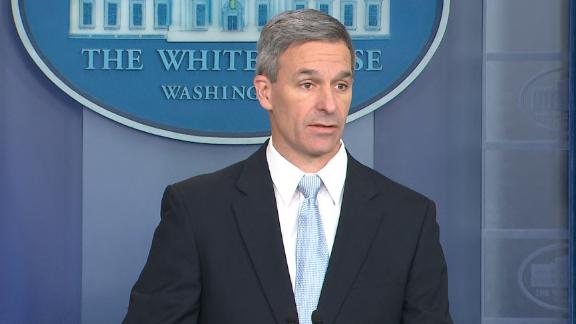 Acting Director of US Citizenship and Immigration Services Ken Cuccinelli announced a regulation that could dramatically cut the number of legal immigrants allowed to enter and stay in the US by making it easier to reject green card and visa applications.

It's practically a parody of Trumpian ignorance and bigotry: Ken Cuccinelli, the acting director of US Citizenship and Immigration Services, offering a rewrite of the famous Emma Lazarus poem inscribed on the Statue of Liberty.

Instead of reading "Give me your tired, your poor, your huddled masses yearning to breathe free," Cuccinelli suggested--in answer to a reporter's question about whether he agreed with Lazarus's poem--that maybe it should say, "Give me your tired and your poor who can stand on their own two feet and who will not become a public charge."

This is in line with a new Trump administration regulation that could dramatically reduce the number of legal immigrants to the United States by allowing officials to reject green card and visa applicants if they are low-income, have little education or have ever relied on social assistance programs like Medicaid or food stamps. "This will help Citizenship and Immigration Services objectively determine whether the applicant is likely at any time in the future to receive public benefits," Cuccinelli wrote in a CNN op-ed.

The law, Cuccinelli says, will require "self-reliance and self-sufficiency for those seeking to come to or stay in the United States," and "self-sufficiency has been a core tenet of the American dream."

Never mind that immigrants are, for one thing, less likely to rely on welfare benefits than native-born Americans, according to research last year by the libertarian Cato Institute. Or that blue-collar, white voters -- Trump's base -- actually enjoy the greatest share of government anti-poverty programs, according to research by the Center on Budget and Policy Priorities.

It could not be plainer: This so-called "public charge" rule (it refers to immigrants who are "primarily dependent" on government assistance) isn't about encouraging self-sufficiency. It's about scapegoating.

None of us are entirely self-sufficient -- those born into wealth or at least economic stability are supported by their families into adulthood; those born into poverty sometimes need the government to step in.

There is nothing shameful --nor should there be anything disqualifying--about needing the help of your society and your community. Human beings in fact form societies to facilitate the kind of widely beneficial peace and prosperity that entire communities can more effectively provide. Countless Americans rely on government benefits. Trump voters are among them, and deserve good health care, food for their families and care into old age. What's sad--and enraging--is seeing this administration try to slam the door on everyone else.

When Trump and Co. are locking refugee children in cages and ripping babies away from their mothers, they defend it by saying that they are trying to curb illegal immigration. As they demand billions to build a border wall to keep undocumented immigrants out, they claim it's about enforcing American laws. If immigrants want to come in, they have to play by the rules, they say.

This latest rule shows what a blow of smoke that all was. The immigrants targeted here are trying to play by the rules and attain legal status. Their only crime is being poor and mostly not white.

Rules like these aren't entirely new -- exclusionary immigration laws are indeed woven into the fabric of American history. But consider for a moment how many Americans-- our parents, grandparents, or great-grandparents--wouldn't be here today if regulations that used the straitened circumstances of new immigrants to measure their future earning potential had been in place.

One wonders whether Ken Cuccinelli's Irish and Italian ancestors were all lucky enough to be financially secure and self-sufficient before they crossed the Atlantic -- or if part of the American dream was arriving impoverished and making your way to something better in a country that was willing to help along the way.

I know that my own not-so-distant ancestors -- a Serbian former prisoner of war with an eighth-grade education, a German nurse and their small child -- coming from devastated post-war Europe, would not have met these new requirements. Nor did they show up in the United States and find vast fortune (they initially found New York flophouses and a Greyhound to Chicago).

But my immigrant grandfather, with a limited education and a thick accent and a physical disability from his years in a war camp, found work in the Chicago steel mills -- those hallowed halls of the white American working class Trump loves to glorify, that in fact employed a great many bootstrapping young immigrants. My Omi worked at a local hospital. Thanks to then-strong unions, relatively affordable housing and good public education, they raised three children in lower-middle-class stability, all of whom climbed the rungs into the American middle class.

Those who defend the Trump policy may argue that our immigrant grandparents didn't get government support. But government support back then didn't exist in an identical state to today; immigrating and then attaining citizenship (particularly for whites) was also significantly faster than it is today, at which point any available benefits were available. The idea that our grandparents simply bootstrapped themselves while today's immigrants are gaming the system is simply false.

American immigrants today working in restaurants, in meat factories, in beauty salons and in our homes as health aids for the sick and elderly, as cleaners, or as childcare workers, want the same things my grandparents wanted: Safety, stability, maybe even modest prosperity for their children and grandchildren.

But this new rule makes explicit just how unwelcome they are. "It will have a dire humanitarian impact, forcing some families to forgo critical lifesaving health care and nutrition," Marielena Hincapié, the executive director of the National Immigration Law Center, told the New York Times, lest they lose the chance for a green card by revealing to the government that they need help getting on their feet.

Needy immigrants shouldn't have to choose between legal status and support from the government of a wealthy, developed nation.

Americans need not throw aside our foundational values in the service of the demagogues and bigots. The periods in our history when we have barred immigrants on the basis of certain characteristics like race are dark, shameful ones.

This administration is discriminating based on wealth, as though the poor are less deserving than the rich--as though being poor is a moral failing instead of an economic reality. And they're in effect effacing the Statue of Liberty to do it.

Arrest made in murder of couple from Springfield

What Supreme Court ruling on birth control means in Oregon