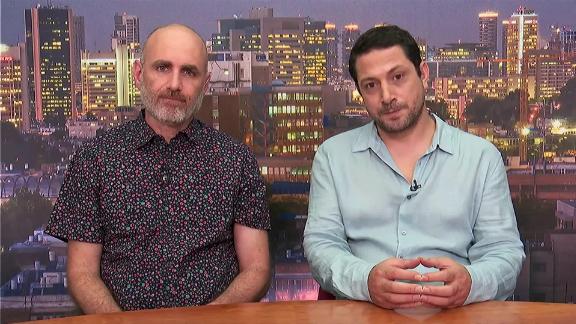 Israeli and Palestinian directors Joseph Cedar and Tawfik Abu-Wael discuss the making of their new HBO series "Our Boys".

The language and pacing in "Our Boys" reflect its Israeli roots, but the emotional core of this powerful fact-based miniseries hinges on tribalism, the intractability of the Israeli-Palestinian conflict, and the adage that an eye for an eye makes the whole world blind. In that, this HBO presentation offers a sobering window into that part of the world, with implications that swell far beyond it.

The series recreates a period in 2014, when the murder of three Israeli youths prompted the abduction and brutal execution of a Palestinian teenager. The investigation of that case plunges deeply into the politics of the situation, with Israeli officials concerned about the protests erupting across the country.

"From a PR standpoint, it's a disaster," one grumbles, after early assurances in response to the teen's abduction that "Jews don't do something like this," which becomes a desperate hope given the fear of mass unrest, and concerns about media coverage that's tossing kindling on the fire.

Shot in Israel in conjunction with Keshet Studios, "Our Boys" unfolds (slowly, it should be noted, and with subtitles) from multiple perspectives, including the frantic parents (Jony Arbid, Ruba Blal Asfou) of the boy; and Simon (Shlomi Elkabetz), the world-weary investigator with Shin Bet, the Israeli Security Agency, tasked with solving the crime, even if his bosses don't relish the answers.

The government, in fact, is depicted as pressuring the investigators, while Simon goes about the meticulous task of building his case, which includes insinuating himself into the lives of his prime suspects.

The protests, meanwhile, take on a life of their own, as the families see their slain children turned into symbols and rallying cries, in a way they can't control, while authorities fret about those passions boiling over.

Premium networks and streaming services have become more aggressive about acquiring, partnering to produce and showcasing international product, largely to fill the demand for content. The results have been mixed, but the benefits of that have included some terrific dramas, such as HBO's Italian-language series "My Brilliant Friend" and now this. (The producers include Hagai Levi, best known to U.S. viewers for "In Treatment" and "The Affair.")

As specific as "Our Boys" is to the politics in Israel and these particular events, its prevailing themes about devastated families being caught up in historic grievances and governments at a loss regarding how to address them, sadly, crosses many borders.

In that respect, this 10-episode HBO series puts faces on a conflict often seen -- especially in the U.S. -- from a distant aerial view, bringing the loss, pain and senseless circle of violence achingly home.

Protest planned in Eugene after death of George Floyd in Minneapolis

DMV services to resume through appointment only