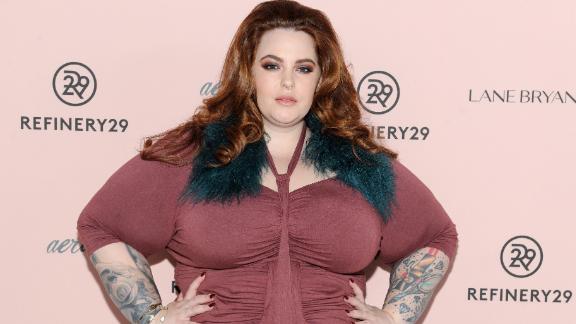 Plus-size supermodel Tess Holliday is being praised for her appearance as the cover girl on Cosmopolitan's October 2018 edition.

Nike has introduced so-called "plus-size" mannequins at its flagship London store. They have been pictured in the shop wearing black crop tops and leggings, which has already prompted disgust from some who claim that their presence "celebrates obesity" and promotes a "dangerous lie."

The new mannequins punctuate a retail landscape which has traditionally played host to advertisements, billboards, and stores that almost exclusively feature rake-thin models. The idea that a few fat mannequins represent a threat to our health is not only absurd, it fails to acknowledge the pervasive and more sinister ideal represented by the mannequins we have considered "normal".

The average American woman is 5 feet 3.5 inches tall, and weighs 170.5 pounds. These dimensions are far more similar to the new, larger mannequins than those we usually see in shop windows. But we have grown used to the sight of "normal" mannequins in the same way we have with Barbie dolls and Disney princesses with waists narrower than their heads.

Female mannequins are typically 6 feet tall, with a 24-inch waist, according to The Guardian. Research published in the Journal of Eating Disorders in 2017 showed that a real woman with the same proportions as a "normal" female mannequin would be emaciated. As a result, it's likely she wouldn't menstruate, and would risk developing osteoporosis, anemia, decreased immune function, and increased complications after surgery. On the other hand, male mannequins -- though they are much leaner than most men -- do not tend to be "underweight."

The message that these underweight mannequins have been sending women for the last few decades is that they must be critically thin in order to look good in clothes or be considered attractive. This reinforces an undercurrent of negative pressure on women which, even if it does not result in damaging weight loss, can have a huge impact on self-esteem and body image.

Promoting the thin ideal in sportswear shops is especially irresponsible. It implies that to play sports, you should preferably be underweight already. And it dashes the arguments of those whose main point of concern regarding the new, larger mannequins is that they are unhealthy.

The association between exercise and thinness does no one of any size, any favors. For people who are inclined towards eating disorders and distorted body image -- the majority of whom are women -- excessive exercise is often used as a means to compensate for perceived overeating, lose unsafe amounts of weight, and mentally and physically exert themselves far beyond safe limits.

For anyone who is not already physically active, the idea that thinness is a prerequisite can add to anxiety around certain activities and spaces -- like gyms -- which some find already intimidating. This may put people off trying to exercise in the first place. Another prevailing idea that the sole goal of exercise is to become thin makes any physical activity seem punitive.

Even if, despite their misgivings, a person does decide to take the plunge and start exercising, high street shopping is exclusionary for many. According to Plunkett Research, about 68% of American women are a size 14 or over, yet many shops don't stock larger sizes at all. Creating retail environments that alienate swathes of the population isn't just terrible business, it is offensive.

Framing fatness as a fault can also prove damaging to people's health. Obesity stigma is overwhelmingly associated with poor mental health outcomes, and has been shown to exacerbate weight gain. It also masks the fact that a person's health may have nothing to do with their weight. It is entirely possible to be very overweight according to a BMI scale, and have good metabolic health, with no greater risk of illness than someone of "normal" weight.

Increasingly, evidence supports considering lifestyle factors -- such as exercise -- rather than weight in and of itself, as the determinants of our health. A fat person who exercises can be healthier than a slim person who does not, and exercise can counterbalance risks -- such as cardiovascular disease -- normally associated with being overweight.

The prevailing image of the thin runner, gym bunny, athlete, only reinforces all the stereotypes which say that thin is healthy, fat is not, and exacerbates the likelihood that fat people are dissuaded from participating in health-enhancing activities.

By bucking that trend with more diverse mannequins -- in one store at least -- not only is Nike representing a far more realistic and representative model of the female population, it is making exercise look more accessible. Their -- so far, less controversial -- para-athlete mannequins are performing the same function. It is valuable and necessary for people of all shapes, sizes, abilities and ages to see themselves represented in shops, as in the world at large.

Similar strategies have been effective in the past. The #ThisGirlCan campaign, launched by Sports England, a public body which promotes community sports, in 2015, featured photos of women of different shapes, ages and sizes participating in sports without airbrushing, showing sweat stains and fat wobbles. The campaign inspired nearly 150,000 women to take up exercise regularly, according to a 2016 Sport England report. #ThisGirlCan identified that body image was a major barrier to participation for women in sports, and proved that inclusion is a means to tackle this.

Women constantly pay the emotional and physical price in a society which makes so many things less accessible to them. The introduction of plus-size mannequins in a Nike shop is no scandal, but the constant deluge of images that tells women that their worth is contingent on a visible rib cage is. Any deviation from this cruel and prejudiced message should be welcomed as one which promotes health -- both physical, and mental. Let us hope that many more brands follow suit.