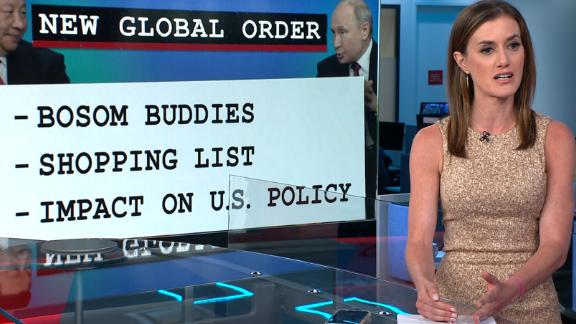 CNN analyst Samantha Vinograd says a new global order is setting the stage for Russia and China to be allies against US interests.

There's a new clique of countries working together, and President Trump's behavior almost guarantees that we're not being invited to join them. His tariff temper tantrums and caustic insults have cast the United States as an unreliable partner among our allies. And by condoning illegal activities and human rights violations from allies and rivals alike, the President is supporting a global realignment of relationships that does not advance strategic US interests.

Countries such as Russia and China are now joining forces to counter us. And while we increasingly go it alone, our competition is building their team's roster. Saudi Arabia -- a key US ally that has benefited from a cozy relationship with the Trump administration -- is now turning to China to build out its ballistic missile program. Meanwhile, Turkey is buying weapons from Russia -- which is still attacking us.

Trump is laying the groundwork for more countries to turn away from the United States and toward new sources of strength and friendship.

It's no state secret that President Trump doesn't pay much attention to what his intelligence community reports, but if he had read the 2019 worldwide threat briefing, he would know that Russia and China are more aligned now than at any point since the mid-1950s.

Russia and China are not natural bosom buddies, given their history of competing with one another. But joining forces against the United States is a strategy that is gaining traction.

The United States has imposed sanctions on Russia, while our trade war with China rages on. Presidents Vladimir Putin and Xi Jinping are both suffering (albeit to different degrees) from US economic penalties. It's no coincidence, then, that Putin and Xi lauded their new friendship this week and signed billions of dollars in bilateral deals.

In addition to an economic partnership, Putin and Xi may be sharing talking points about the United States' purported wrongdoing. China is ramping up its rhetoric about unsafe conditions in the United States while painting the United States as the provocateur as part of its trade war propaganda. Russia, on the other hand, has previously likened US sanctions to economic war.

While Russia and China may have previously competed in the global hegemony, they now share a mutual desire to diminish US influence -- especially on the Korean peninsula. Putin and Xi are two of North Korea's biggest patrons and they want to keep Kim Jong Un in power. If there is a regime change, that could lead to the installation of a more pro-US leader in Pyongyang. They also want to avoid a US military strike that could put more American troops in their neighborhood. Both men have been parroting Kim's wish list of US sanctions relief while pressuring us to stay mired in negotiations going nowhere.

We should expect Putin and Xi to continue publicly celebrating their shared interests, increasing their economic cooperation and privately coordinating ways to trump US dominance in various theaters. Both countries have been accused of trying to interfere in our elections, and both have advanced cyber capabilities, not to mention weapons of mass destruction and advanced conventional military capabilities.

Russia's joint military exercises with China, along with its decision to sign a deal with Huawei for 5G services in Russia after Trump's decision to blacklist the Chinese telecom giant, are clear signs that Russia and China can bury the hatchet long enough to try to bury us.

Our rivals are not only working together, but they're also pulling some of our allies away -- which probably isn't an accident. As these new partnerships strengthen, the United States will have a harder time putting up a united front with our old friends to penalize rival powers like China and Russia for their global malfeasance.

Saudi Arabia, for one, has been shopping for ballistic missiles, especially as the threat from Iran has increased. Given US restrictions on the export of rockets capable of carrying nuclear warheads, Saudi Arabia has reportedly turned to China instead for missiles and technology that we will not give them.

China has since described Saudi Arabia as a "comprehensive strategic partner" and said both countries "maintain friendly cooperation in all areas, including in the area of arm sales."

This fuels concerns about an arms race in the Middle East -- especially as Saudi Arabia's crown prince has said the kingdom would pursue a nuclear weapon if Iran restarts its nuclear program.

The Trump administration has stood by Saudi Arabia despite the US intelligence community's assessment that the crown prince directed the brutal murder of journalist and US resident Jamal Khashoggi. The Trump administration has also looked the other way on Saudi Arabia's human rights abuses both domestically and in countries such as Yemen -- largely because of our alliance against Iran, not to mention the weapons deals President Trump purports they signed with us.

Saudi Arabia has little reason to think that we would react adversely to these purchases from China. If we didn't take strategic steps to punish the crown prince for Khashoggi's dismemberment in Istanbul, the purchase of ballistic missiles is unlikely to be the last straw.

Saudi Arabia has previously expressed an interest in buying Russian anti-missile systems which would trigger US sanctions. Turkey, another US ally, is slated to receive the Russian S-400 defense system next year, despite the risk of triggering US sanctions and, more importantly, undermining the NATO alliance by purchasing a Russian system that cannot be integrated with other NATO member countries.

It's clear that our allies don't think we're the only vendor in town, and they're not limiting their shopping sprees to US allies.

This is, in fact, a brave new world. As President Trump continues to alienate our friends and condone countries pursuing any number of illegal activities, the new global alliances that are forming could diminish the United States' ability to pursue long-held American ideals of a global rules-based order to enforce non-proliferation and stability.