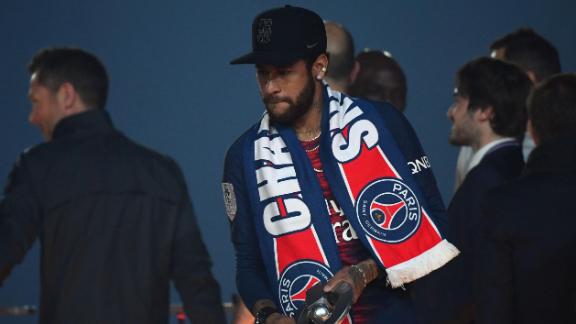 Brazilian football star Neymar da Silva denied rape allegations Sunday, publishing texts and photos he said prove he was set up, and his representative claimed he was the victim of attempted extortion.

Brazilian football star Neymar da Silva denied rape allegations Sunday, publishing texts and photos he said prove he was set up, and his representative claimed he was the victim of attempted extortion.

"I'm being accused of rape," the Paris Saint-Germain player said in a video published on his Instagram account. "Yes, it is a heavy word, a very strong thing," he said in Portuguese.

"What happened was totally the opposite of what they are talking and saying," Neymar said. "I'm very upset at this moment."

According to a Sao Paulo police report dated May 31, the accuser, a resident of Brazil, told police she met Neymar on Instagram, and the two began exchanging messages. Neymar "invited her to meet him in Paris," then "supplied her with plane tickets and accommodation." She told police she arrived in Paris May 15, staying at the Hotel Sofitel Paris Arc Du Triomphe.

"The victim states that on that day, Neymar showed up at the hotel" about 8 p.m., "apparently drunk," according to the police report. The two talked and began to "exchange a few 'cuddles', however, at a certain point, Neymar became aggressive and violently engaged in sexual intercourse against the will of the victim," the report said.

The woman left Paris on May 17 and waited to file a report in Brazil because she "was quite emotionally shaken and scared of registering the facts in another country," the police report said.

In the video, an emotional Neymar contended that his encounter with the accuser was "a relationship between a man and woman, within four walls, something that happens with every couple," but also that he had been set up. "It was a trap, and I ended up falling for it."

Neymar's representative, NR Sports, said in a press release that the player "was a victim of attempted extortion, practiced by a lawyer from the city of Sao Paulo, who, according to his version, represented the interests of the alleged victim."

Neymar ended the video showing flirty and at times explicitly sexual texts and intimate photos that he said were exchanges with his accuser. The exchanges began in March, according to the time stamp on the texts.