Boris Johnson, favorite to be Britain's next PM, to face court for alleged Brexit lies 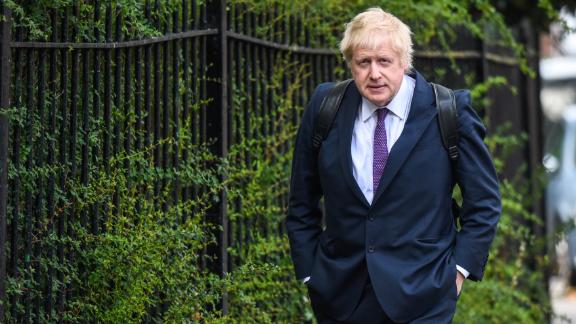 The leading candidate to succeed Theresa May as British Prime Minister has been ordered to appear in court to face allegations he lied to the public during the 2016 Brexit referendum campaign.

A judge at Westminster Magistrate's Court in London ruled that Boris Johnson, a former UK foreign secretary, must face a private summons on three counts of misconduct in public office.

Johnson, who was the high-profile face of the Leave campaign, is accused of falsely claiming that Britain's membership of the European Union cost £350 million ($442 million) a week.

The claim was plastered on the side of a bus that toured Britain during the tightly fought campaign that resulted in a 52% vote in favor of the UK leaving the EU.

"Having considered all the relevant factors I am satisfied that this is a proper case to issue the summons as requested for the three offenses as drafted," wrote Judge Margot Coleman.

The summons was lodged by Marcus Ball and financed by a crowdfunded campaign. He claims Johnson misled the public in the run-up and aftermath of the referendum, and repeated the £350 million claim during the 2017 general election.

In his application, Ball's case was that Johnson "knew that such comments were false or misleading" and that on other occasions had used "accurate figures and showed a clear understanding of how to quantify UK spending in respect of the EU."

The applicant's legal team wrote to Johnson in November 2018, asking him to provide a written explanation for his claims -- which never came

Johnson's lawyers dismissed the application as a "political stunt" made by the prosecutor from campaign group Brexit Justice Limited whose sole purpose is to "undermine the result of the Brexit referendum."

Johnson's representatives said the application did not amount to an "evidential and legal case for the issuing of a summons." Instead, he said, "for the first time in English legal history" it attempts to "employ the criminal law to regulate the content and quality of political debate."

Were the application to succeed in a criminal sanction, it could pave the way for other crowdfunded private prosecutors lodging applications against British politicians over misleading statements.

Johnson will now face a preliminary hearing at the magistrate's court, which will decide whether to send the case on to the higher crown court.

At this point, the British prosecuting authority, the Crown Prosecution Service (CPS),could step in to take over the prosecution and shut it down, if it feels there is no public interest served in going ahead with it.

Alternatively, Johnson's legal team could seek a judicial review of the magistrate's decision, a process that could take months.

The application comes at a delicate time in British politics, with Westminster in turmoil over Brexit negotiations and Prime Minister May last week announcing she was stepping down as leader of the governing Conservative Party in light of her failure to deliver on the result of the 2016 vote.

Pundits have now put Johnson at the top of a wide field of candidates to succeed May next month. But with voters turning their backs on the two major parties -- the Conservatives and Labour -- in favor of fringe movements such as the Brexit Party and Greens during last week's European elections, the next prime minister will need to unite a deeply divided nation.