Alyssa Milano: Why the time is now for a #SexStrike 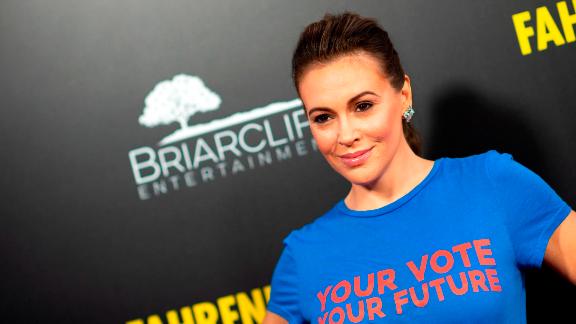 Actress and #MeToo movement activist Alyssa Milano is calling for a "sex strike" as a way to protest anti-abortion laws.

Calling for a sex strike as a way to protest restrictions on abortion has sparked a powerful response.

Sure, it's been a mixed reaction, but it got the country talking about the GOP's undeniable war on women. And let's face it, with so much going on every day in the news, sometimes we need an extreme response to get national attention.

So now that we have your attention: Our reproductive rights are blatantly and systematically being stripped away before our very eyes. Abortion care is a normal and at times necessary medical procedure, but anti-choice activists have strategically chipped away at abortion rights and access for decades, with the hopes of overturning Roe v. Wade.

The attempts to treat women as second-class citizens have become increasingly brazen, and just last week Georgia Gov. Brian Kemp signed the "heartbeat bill," which bans most abortions as early as six weeks into pregnancy. The bill also allows a fetus to be counted in the census, and can be claimed as a dependent minor on income taxes.

Georgia is the fourth state to pass a six-week ban this year, and is one of 16 states working to pass such legislation. None of these bans have yet to take effect, and while they will be challenged in court, they are part of an alarming trend.

The attacks on women and abortion rights don't stop there. In Alabama, lawmakers are scheduled to vote on a bill that would ban nearly all abortions with a single exception in cases involving a serious health risk to the mother. The Texas legislature had hearings on a bill that would allow a woman who has an abortion to be charged with capital murder -- a crime that is punishable by death in the state. And there was a bill in Ohio that required the removal and replacement of an ectopic pregnancy (when a fertilized egg attaches itself outside the uterus), which is a medical impossibility.

All of these bills have the same, singular purpose: to make it up to the Supreme Court. The sponsor of Alabama's pending abortion bill, Representative Terri Collins, openly said that the bill's goal was to spark litigation that would force the Supreme Court to overturn Roe v. Wade. Anti-choice legislators speak with alarming candor and their intentions are very clear. They want to take away all control pregnant people have over their own bodies.

Sixty percent of abortions are are performed by independent providers in our country, according to a 2017 Abortion Care Network report, and advocates on the ground are doing incredible and often thankless work. Groups like SisterSong Women of Color Reproductive Justice Collective are fighting for the human right to maintain personal bodily autonomy.

Organizations like Feminist Women's Health Center (FWHC) in Georgia and ARC Southeast in six Southern states including Georgia are doing advocacy and education work and funding and practical support, respectively. The Abortion Care Network is another organization working to ensure meaningful access to abortion care across the US through independent abortion providers.

Organizers on the ground across the Midwest and South have been working for decades at the state level. These advocates and organizations rarely receive the national attention they need to significantly move the needle, not just to defend against harmful legislation, but to actually move proactive legislation that supports our communities. We need everyone to be engaged in this assault on our reproductive rights.

The time for national engagement on this issue is long overdue.

We must collectively reject these restrictions on our basic human rights and dignity in every way that we can. This flood of anti-abortion legislation is completely outrageous and an equally bold response is required. And, so, we call on all people whose rights are in danger to participate in a #SexStrike.

Laws restricting abortion rights and access are a targeted attempt to erase decades of hard-fought gains for women's autonomy. A #SexStrike is another way for people who have the potential to get pregnant to call attention to this systematic onslaught and assert the power to change our own destinies.

Lysistratic protest is a longstanding, effective and empowering method to fight for change. In the 1600s, Haudenosaunee (Iroquois) women refused to engage in sex as a way to stop unregulated warfare, and their demands were met. In 2009, activists in Kenya organized a sex strike to force an end the deteriorating relationship between the President and Prime Minister. The strike lasted seven days, and ended when the leaders finally agreed to talks. In 2011, Colombia women used a sex strike to get a dangerous 35-mile road repaired.

When utilized as part of a broader strategy of coordinated action, sex strikes can raise awareness and achieve a wide range of political objectives. This is just one tool available in the fight for reproductive justice and abortion access -- we must also support the organizations and individuals working courageously on the front lines by supporting them.

At its heart, these attempts to wield control over sex come from a desire to reassert total control over our bodies and our reproductive rights. But really, it's about power. Whoever controls reproduction has power. The stakes are extremely high, and a number of lawmakers, many of whom are men, get to make decisions with serious ramifications.

We need to pay attention to the incremental challenges to abortion rights and figure out how to resist them both collectively and individually.

A #SexStrike is a way to target straight, cisgender men so they may feel the physical consequences of our reproductive rights being systematically eliminated. This form of protest has the potential to raise the issue far beyond the usual groups engaged in debates about reproductive health. It's a way to ignite conversation and help everyone understand the gravity of the situation and the immediate need for swift action.

Our vision is a world where people can all thrive. We want everyone to live healthy lives and have control over their sexual and reproductive choices. Join us by not having sex until we achieve full bodily autonomy for all.

It's time for a #SexStrike.

Chief Skinner: No arrests made during Eugene riot

Arrests made as groups refuse to observe curfew