Easter isn't about sacrifice, it's about faith and love 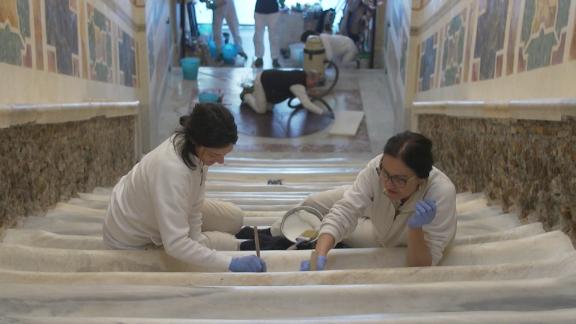 Visitors to Rome this Easter can have a once-in-a-lifetime experience: climbing the original stairs that Jesus is said to have walked on before his crucifixion.

You think you know what Easter means?

Even when people have no idea about this season, around this time of year there is an awareness that something is happening. A person comes into the office or classroom with a charcoal cross on his or her forehead; a friend or colleague is taking a trip to see family for the holiday; the stores are selling Cadbury eggs.

Certainly the calendar marks off the day as something special, and there is also a general sense of the turning season: the long winter has ended and summer itself winks in the margins of daily life.

Indeed, Easter marks a change, and it has to do with the feeling of rebirth or regeneration. But it is more complicated than that.

I have a visceral sense of all this, having been raised in a fundamentalist household, and my memories of Easter reach back to beginnings: my father, a Baptist minister, understood the centrality of this special day, even the whole Easter weekend. As a boy, I fidgeted through long services on Good Friday and listened to readings of the seven last words of Jesus on the cross, which built up to the resounding: "It is finished."

I recall being quite upset, imagining the cruelty of the sacrifice of God's only son. I thought it was horrific. I didn't want him to have to die for miserable sinners like myself.

Soon enough I grew to dislike this version of Easter, with the crucifixion as some form of blood-revenge. Why would a God who had gone to the trouble to create humanity take such umbrage? Why would he need to put his only son on the cross and see him publicly tortured—brutalized--to satisfy his feelings of disappointment and anger at what his people had done? Was I missing something?

The famous hymn about being "washed in the blood of the Lamb" sounded, to my young ears, increasingly disturbing. God is better than this, I thought. The human beings he had created were surely good enough for him?

Simplistic ideas about the meaning of the crucifixion still abound, and there is a vast industry founded on what is called "substitution theology." One can easily dig through the Hebrew and Greek scriptures to snatch occasional verses that seem to support this transactional theology, with God in a bargaining mode, needing "payment" for our sins.

But I've studied the scriptures carefully, especially the gospels and Paul's letters, and I see no reason to capitulate to this downsized version of Easter weekend, with a vengeful God putting up his own son on a cross for satisfaction of some kind.

In any case, the idea of satisfaction or "payment" is fairly recent, tracing back to St. Anselm in Cur Deus Homo? This treatise, written in the late 11th century, put forward the idea of the death of Jesus as atonement for human sins, a "satisfaction" for the wrath of God.

A century or so later, Peter Abelard famously rejected Anselm's theory, suggesting that the death of Jesus was simply an act of love, showing humanity a way forward, an example of divine benevolence. Jesus lived and died to teach us how to live and die ourselves, or how to "empty ourselves out," as St. Paul says. The crucifixion is first and foremost a prelude to the Resurrection.

Jesus had faith in God, resting in the arms of an all-embracing love. That's a fancy way of saying that Jesus trusted that all would be well in the end, which is what Easter teaches us. And a crucial text here -- a key one -- is Romans 3:22, where Paul suggests that reconciliation with God, which is a better way to define "righteousness," is achieved through imitating Jesus in his self-abandonment on the cross on Good Friday.

I would translate this critical verse in this way: "We are reconciled with God by imitating the faith of Jesus, and we hold him dearly for this." (I always prefer to use the phrase "hold dearly" for "believe," as this is the root of the word. It has no reference to "belief" in the epistemological sense of that term.) There is clearly a huge difference between having "faith in Jesus" -- a nod of assent -- and imitating the "faith of Jesus."

Easter teaches Christians this, I believe: to emulate the faith of Jesus in the goodness of the universe-- to rest in God, whatever we mean by that great holy syllable, which seems a stumbling block for so many in our highly secular world. It teaches us about what it means to lose ourselves, our petty little selves, in order to gain something larger: reconciliation with creation itself.

Christians all walk with Jesus out of the tomb on Easter morning, reborn as free people, released from the straightjacket of time itself. And this is nothing but joy.