Kirsten Gillibrand is a human being who admits mistakes 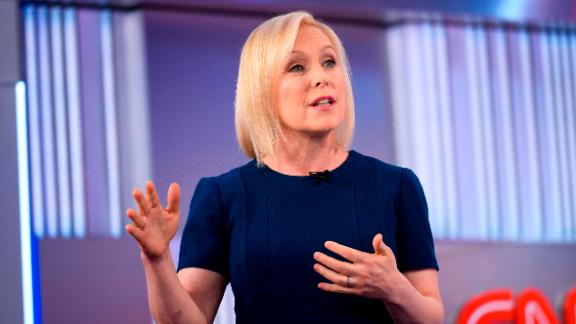 During a CNN town hall, Sen. Kirsten Gillibrand (D-NY) explains why her position on issues such as immigration have changed.

On Tuesday night, America was introduced to an unfamiliar woman: Kirsten Gillibrand, actual human being.

Gillibrand has been in politics for more than a decade, and her identity is more often caricatured (she's Hillary Jr., she's Tracy Flick, she's the woman who brought down Al Franken) than captured.

Her CNN town hall on Tuesday was a chance for her to present herself to the many who may have only heard about her in outline. What she filled in: that she's a person who, like all of us, evolves and shifts; that she can be deeply empathetic and flatly indignant; that she's fluent in policy and has a message of fighting greed and knitting the country back together.

In a political environment increasingly defined by overconfidence, unflinching certitude and uncompromising fidelity to a specific worldview, Gillibrand expressed caution and even remorse when she was uncertain. She said some of her decisions as a Congresswoman from a red district in upstate New York (from 2007-2009) now bring her shame -- a striking departure from the usual non-apology political justifications.

Where she was undecided or unsure on an issue -- something that came up in questions about mandatory vaccines and lowering the voting age to 16 -- she simply said so, rather than offering a winding non-answer. And when she knew, she knew: Gillibrand's policy solutions were detailed and clearly at the heart of her case. When she was asked about the role of private insurers in her vision of Medicare for All, she emphasized her role in crafting the transition section of Bernie Sanders's bill, explaining how broad Medicare benefits will essentially undercut insurance companies and naturally drive them from the marketplace.

She compared the Green New Deal to going to the moon: an exciting and perhaps preposterously ambitious plan, but one that is doable with dedication and resources -- and could even include, she said, getting to net-zero carbon.

This is the striking thing about Gillibrand: she comes across as a human being who learns, changes, and is sometimes still making up her mind. But she's also a very particular kind of human being: sharp and determined, the kind of bull-headed lawyer whose personal inclination appears to be making her case without messing around with niceties.

For a female politician in an "is she likable?" obsessed media landscape, this can be a liability.

And so Gillibrand is also trying to be liked. At her town hall, she recited a similar "thanks for your bravery" line to multiple questioners. Throughout her campaign, she has put maternity at the forefront, emphasizing her desire to make the world better and safer for her sons. Personally, I like bull-headed, get-stuff-done-and-forget-your-feelings Gillibrand.

But that's not exactly a winning persona for a woman in a sexist country, and so last night she led with Empathetic Kirsten.

And good for her. Much of her work, especially on sexual assault, has clearly been driven by empathy, it just hasn't necessarily come across in the coverage. As a senator, she led the charge on combating sexual assault in the military and on college campuses, truly owning the issue and lending her platform to vulnerable men and women. But she found herself better known for being one of several senators who called on Al Franken to resign after he was accused of sexual misconduct, and inappropriate photos surfaced of him that appeared to show him pretending to grope a sleeping woman.

Despite the fact that her decision to hold Franken accountable was exactly in line with her policy positions, many Franken sympathizers accused her of trampling his due process to put herself in the spotlight. And despite the fact that several other members of the senate also called for his resignation, Gillibrand took the heat for being an early voice.

On Tuesday night, given a chance to show a fuller version of herself to America, Gillibrand leaned into her own complications. And in doing so, she helped expand, just a little more, the idea of who a woman in politics can be.