Fear stalks Kashmir, one of the most militarized frontiers on the planet 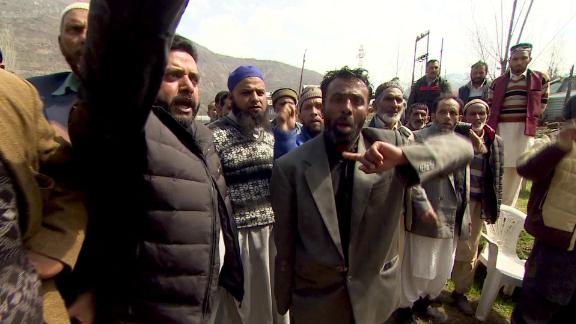 If it wasn't for the military installations that dot the mountain passes, the endless coils of barbed wire, or the armed soldiers around every corner, this small border town in Indian controlled Kashmir might be mistaken for a tranquil mountain paradise.

The air is cool and the surrounding peaks are capped with snow, blindingly white in the early Spring sun.

But the tremor and the terror in Mohammad Riyad's voice as he recalls what happened in the middle of the night in late February betrays the true reality of the situation.

Riyad lives in a small village just beyond the town of Uri, in the shadow of the Line of Control (LoC), the de facto border that divides this disputed region between India and Pakistan. It is one of the world's most militarized frontiers, the site of frequent armed showdowns between the two nuclear foes, both of which claim Kashmir in its entirety.

Violence here is always just a hair trigger away.

Shelling across the frontier is common. According to official figures tabled in the Indian parliament in March last year, cross border firing incidents along the LoC have risen dramatically in recent years, from 152 in 2015 to 860 in 2017. Riyad and numerous other local residents say the situation has worsened in recent weeks.

"I was asleep when a shell landed right outside my window," he says, his voice cracking as he lifts up his shirt to reveal what happened next: Shrapnel rained down on his bed, splitting open his abdomen.

Emergency surgery in Srinagar, main city in Indian controlled Kashmir, saved his life. A blackish ladder of stitches runs up and across his stomach.

Thankfully, he says, his wife and children were sleeping away from the window and escaped without any injuries. The family remains fearful of further attacks. "It could happen again tonight."

Tensions across the region spiked after a February 14 car bomb attack on Indian forces in south Kashmir.

Delhi, which says Pakistan had a "direct hand" in the bombing, responded by sending fighter jets across the LoC, deploying air power to strike in its opponent's territory for the first time in five decades.

India says it was targeting a training camp run by the group behind the attack, an account Pakistan disputes. Islamabad also denies any role in the bombing.

Next came an aerial skirmish between the two sides, and then the capture of an Indian pilot by Pakistan.

The pilot's quick release helped reduce hostilities, pulling the two countries back from a violent spiral that many observers feared could tip into all out war and, in the most extreme scenario, even give rise to a nuclear clash.

But, locals here say, the two sides continue to fire artillery shells across the LoC, each side blaming the other for the violence.

Meanwhile, as India gears up for national elections set to begin on April 11, the conflict has become a major campaign issue, with India's nationalist Prime Minister Narendra Modi and his allies holding up the recent air skirmishes as proof that he's strong on defense -- stronger, they insist, than his predecessors and rivals.

In a recent interview with the local Economics Times daily, Amit Shah, President of Modi's Bharatiya Janata Party (BJP) and his closest political aide, said: "Until now, there were only two countries which took revenge for the martyrdom of their soldiers -- the US and Israel. Because of Prime Minister Narendra Modi, India is now the third country to do so."

In case there was any doubt about whether the BJP wanted to make national security an election issue, Shah added: "National elections have to be fought on who can ensure better national security."

Modi has also referred to the border tensions. "Enough is enough," he said at a public event in March, referring to the February attack, and an earlier 2016 attack on a military installation in Uri, according to the Indian news agency PTI. "We cannot keep suffering till eternity."

As politicians' grandstand, fear stalks ordinary Kashmiris, like 16-year-old Mohammad Ansar, who lives in another village near the de facto border.

Ansar was at home having lunch with his mother and two brothers in mid-March when they heard the sound of shelling outside.

"We ate and then went outside to see where it was coming from when a shell landed right where were standing," he says.

Ansar says it seemed to come out of nowhere. "It was quiet when we went outside. We didn't hear anything and suddenly it hit us."

Ansar was knocked down and suffered a head wound.

His brothers, both ten, and his mother were also injured: One of the young boys still has a cast around one leg, and bandages around the other.

Their mother's neck and shoulders are covered with surgical bandages. "We're still very scared," Ansar says. "Every time I hear a loud noise, I panic."

So do Babur Ali's children. Ali used to live near the border, but increased shelling in the aftermath of the February air skirmishes forced him to flee with his family.

Huddled together in temporary housing near Srinagar in the biting Kashmiri cold, he says his children are terrified of returning to their village because of the shelling.

"We had to leave our home, our possessions, everything... we had no choice."

With Kashmir still tense, they've become refugees in their own land.