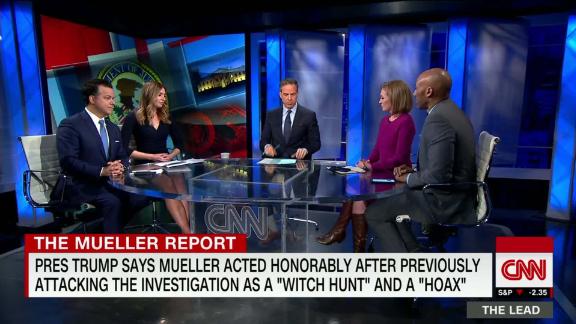 Many Europeans are fearing the consequences (and in the case of Russia, hailing the initial conclusions) of the Mueller report and what it portends for the future of Donald Trump's presidency and his prospects for a second term.

With Europe heading into a political campaign of its own for the European Parliament, the resurgent, populist right in a host of countries has to be feeling a new energy now. Trump's former chief strategist Steve Bannon recently wound up a long swing across the continent shoring up right-wing, populist parties and vowing to set up "war rooms" in a host of countries in advance of the May balloting. That vote will determine the future of Trump-style politicians' efforts to increase their clout in Europe's pan-national legislative body.

On Monday, France's leading centrist daily Le Monde expressed worry that Mueller's "conclusions reinforce Trump in his battles to come, even including his re-election," as the banner headline to the piece by its Washington correspondent, Gilles Paris, observed (translation is mine).

Meanwhile, Germany's national daily Suddeutsche Zeitung noted, "Robert Mueller showed the Americans -- at least those who want to know it -- what kind of character their president has." As its Washington commentator Hubert Wetzel concluded in a far from oblique reference to Chancellor Angela Merkel's electoral problems: "In a democracy, however, there is only one reasonable, legal and legitimate way to drive an elected president out of office: to defeat him at the next election" (translation is mine).

By contrast, Russia's state-owned RT branded the entire probe one of the "greatest hoaxes in US history" and questioned whether now the "Russiagate narrative's peddlers" would be held accountable -- especially the "Democrats and mass media" -- "for weaponizing the Mueller probe against Trump, ruining US-Russia ties and the lives of many Americans."

Kremlin spokesman Dmitry Peskov was quick to point out in statements to Russian media: "We believe the accusations that continue to be made against Russia in terms of interference in the US electoral processes are unfounded because even the brief information that is listed in the summary [of the Mueller report] has no basis." He apparently could not resist concluding with a typically Russian turn of phrase: "It's hard to find a black cat in a dark room, especially if it's not there."

Some still saw the Mueller report as a "questionable triumph for Donald Trump," as the German daily Frankfurter Allgemeine Zeitung headlined its report. Yet the paper reserved some cautionary words for American Democrats, many of whom have some support among more liberal forces in Europe. FAZ, as it is called, asked: "Are Democrats disintegrating?" The paper's commentator warned, "Many an undecided voter could be satisfied with the result that there was no systematic conspiracy with Russians."

In Britain, the overwhelming political energy these days is being reserved for its own Brexit meltdown, with the latest chapter to be played out later this week. Still, The Telegraph's Ben Riley-Smith didn't hold back from calling the Mueller report "a huge win for the White House" and adding that "any hopes of impeaching the president have taken a resounding blow."

Still, there is a growing feeling that Europe has long decided the most prudent course is to go it alone without the United States and without Donald Trump. The most immediate evidence? French President Emmanuel Macron, himself a target of his own right wing, and once a close Trump ally, had not a single comment about the Mueller report. He was busy entertaining Chinese President Xi Jinping in the south of France and assembling European leaders with Xi this week in Paris to discuss a joint approach to global warming.