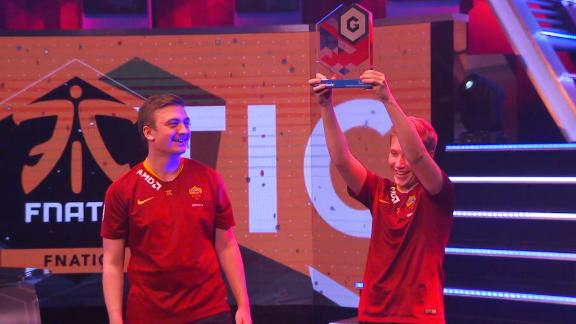 AS Roma Fnatic is one of the best FIFA esports teams in the world, but what is the key to their success? It might be the world's first FIFA gaming house.

A decision on whether to increase the size of the 2022 World Cup from 32 to 48 teams will be made in June, the head of football's world governing body FIFA has said.

The FIFA Council met in Miami on Friday and discussed the results of a feasibility study that looked at the possibility of expanding the tournament.

FIFA president Gianni Infantino said the study showed it was possible to increase the size of the competition to 48 teams "providing certain conditions are met."

Infantino also said doing so would require some neighboring countries to share hosting duties and that FIFA was "working very closely" with Qatar to explore the possibility of tournament expansion.

"We will move to the next stage, we will explore the possibility of who could potentially be hosting some of the Games in the Gulf regions," Infantino said.

"And if we come to some conclusions in June we will make a proposal to the Council and to the Congress, who is our ultimate decision making body, who will provide the final decision on this topic.

Qatar was awarded the right to host the 2022 World Cup, the first ever to be held by a nation in the Middle East, back in 2010.

A spokesperson for the country's Supreme Committee for Delivery and Legacy, which oversees planning and infrastructure of the 2022 event, said Friday that Qatar had been open to discussing the possibility of expansion since last year and had always wanted to ensure the tournament belonged "to the entire Arab World and the Middle East."

"We will work with FIFA to determine whether or not a viable operating model does exist and importantly, whether it is in the best interests for football and for the tournament, and for Qatar as the host nation," the spokesperson added.

"After these consultations, the final decision will be made by Qatar and FIFA. Until we reach that conclusion, we will continue to work toward hosting a 32-team World Cup in 2022 hosted in the state of Qatar."

World football's governing body had already agreed that the 2026 tournament, which will be jointly held by the US, Canada and Mexico, will feature 48 teams -- although that decision was made before the bidding process had concluded.

FIFA has reportedly identified stadia in Kuwait, Oman, the UAE, Saudi Arabia and Bahrain as possible World Cup venues should the 2022 tournament be expanded.

As things stand, the ongoing diplomatic impasse between the 2022 World Cup host and some of its Gulf and Middle East neighbors means Kuwait and Oman are likely to be the only realistic options as potential co-hosts.

Saudi Arabia, Bahrain and the UAE as well as Egypt cut diplomatic, economic and travel ties with Qatar in 2017 after accusing it of supporting terrorism. Qatar has strongly denied the allegation.

Qatar has already set about constructing seven new stadiums and renovating one other venue, as well as building infrastructure such as new roads and transport systems for the event.

A host of NGO's and human rights groups wrote to FIFA earlier this week demanding that any country potentially considered as a 2022 co-host must meet FIFA's own human rights standards.

Infantino also announced Friday that a new Club World Cup would begin in 2021 and the video assistant referee (VAR) system would be used in the Women's World Cup in France later this year.

The new Club World Cup would replace the Confederations Cup, which currently takes place the year before every FIFA World Cup, and would feature 24 club sides.