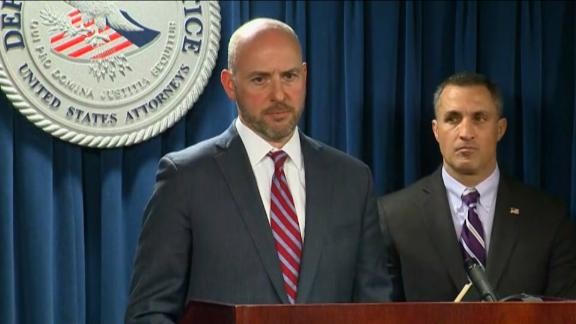 Dozens of people, including actresses Felicity Huffman and Lori Loughlin, face racketeering charges over allegedly facilitating cheating on tests and bribing college coaches, according to a federal indictment.

Two top actresses who rose to fame playing popular TV moms now find themselves at the center of an alleged college admissions scam that reads like a Hollywood plot.

Felicity Huffman and Lori Loughlin are among 50 individuals facing federal charges in what investigators dubbed "Operation Varsity Blues" -- a scheme in which wealthy parents allegedly cheated to help their children gain admittance to prestigious schools.

Loughlin is best known for playing the beloved Rebecca Katsopolis (a.k.a. Aunt Becky) on the family-friendly sitcom, "Full House," which ran on ABC from 1987 to 1995. Loughlin reprised the role in 2016 on the Netflix spinoff, "Fuller House." The series was recently renewed for a fifth and final season. She also stars on Hallmark's "Garage Sale Mystery" and "When Calls the Heart."

Mossimo Giannulli, Loughlin's husband of 20 years and the founder of American clothing company Mossimo, is also named in the indictment and was arrested Tuesday morning. The two are charged with conspiracy to commit mail fraud and honest services mail fraud. Giannulli allegedly paid bribes up to $500,000 in exchange for their two daughters to be designated as recruits to the USC crew team, though they did not participate in crew, according to court filings obtained by CNN.

Giannulli and Loughlin were recorded on calls with a cooperating witness stating that if they were ever caught they would say they made a donation to the foundation, the indictment stated.

Loughlin is expected to surrender at the Central District Court in Los Angeles Tuesday afternoon, according to a law enforcement source.

CNN has reached out to representatives for the couple.

Huffman, a best actress Oscar-nominee for the 2005 film "Transamerica," was arrested in Los Angeles Tuesday on charges of felony conspiracy to commit mail fraud and honest services mail fraud. She is also expected to appear in court Tuesday. Her husband, actor William H. Macy, was not indicted. She is accused of paying $15,000 to an organization that allegedly facilitated additional time and corrected answers on their daughter's SAT exam. Huffman, like Loughlin, was recorded on a phone call with a cooperating witness, according to the indictment.

Huffman became a household name playing mom-of-four Lynette Scavo on the series "Desperate Housewives," which ran from 2004 to 2012. She also starred on the ABC drama "American Crime."

Between the two shows she has been nominated for five Emmys, winning for "Housewives" in 2005.

Huffman's upcoming projects include the web series, "When They See Us," from director Ava DuVernay, and the Netflix film, "Otherhood," set for release next month. Macy -- who she married in 1997 -- continues to star in the Showtime series "Shameless."

In a recent interview with Parade magazine, Macy talked about the college admissions process for his eldest daughter.

"We're right now in the thick of college application time, which is so stressful," Macy is quoted. "I am voting that once she gets accepted, she maybe takes a year off. God doesn't let you be 18 twice."

Macy declined to comment as he passed reporters outside court Tuesday.

CNN has contacted a representatives for Huffman.