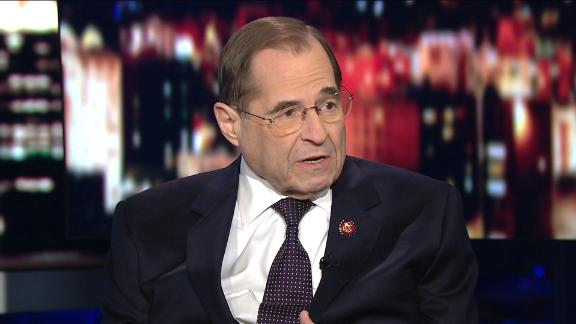 House Democrats are laying down a vast net as they ramp up their investigation into deep tracts of the President's personal, business and political life, with a breathtaking document request from a list of 81 people, agencies and entities.

They went after the Trump Organization, Trump employees, the Trump presidential campaign, the Trump transition team, the Trump inauguration committee, the Trump White House and blood members of the Trump clan.

The intent of the sweeping oversight offensive designed to encircle the President, launched by Rep. Jerry Nadler, the New York Democrat who's the chairman of the House Judiciary Committee, is clear. Democrats are eyeing a case that Trump is not fit to continue in his job.

"Our goal is to hold the administration accountable for the obstruction of justice, the abuse of power and the corruption," Nadler said on CNN's "Erin Burnett OutFront" on Monday.

"Our goal is to protect the rule of law in this country. We have to find out what is going on and we have to lay out a case to the American people and we have to reveal it."

While Democrats are convinced they can make a case that denigrates Trump, it is a measure of the political sensitivity of their quest that they are not willing to talk about their options at the end of it.

Whether the eventual remedy for that case is impeachment or the 2020 election, in which voters will be asked to reject what Democrats already brand a historically corrupt presidency, is a decision for down the road.

"This is not a pre-impeachment hearing," Nadler said. "If we are going to do anything, we have to have proof."

It's basic politics for Democrats not to call their investigations an impeachment drive right now. To do so would hand the GOP a gift as it claims the fix is already in -- a case some Republicans are making, as well as arguing that Democrats are trying to reverse a presidential election and that the constant investigations are a classic case of congressional overreach.

"(They are) going into every part of his life now. In America, we investigate crimes. We don't investigate people," said Rob Astorino, a prominent Trump supporter, Monday night on CNN.

To defuse such claims, the Democratic line is that the majority is simply fulfilling a duty to check a norm-busting President.

"To do anything less would be delinquent in our duties to exercise our oversight," House Speaker Nancy Pelosi said on Monday.

Perhaps Democrats will not turn up offenses by Trump that would meet the constitutional impeachment threshold of "high crimes and misdemeanors."

Or Democratic leaders, sensing the Republican Party will never ditch its President, could conclude that a foiled effort to oust Trump in a Senate trial could harm their political prospects more than his in 2020.

But the shadow of a potential impeachment process will never pass, given Nadler's use of terms like "abuse of power" and "obstruction" -- offenses for which presidents have faced impeachment inquiries twice within the last 50 years.

And Nadler, as chair of the Judiciary Committee, would preside over any eventual impeachment proceedings -- which would likely be based on evidence that his investigators are now seeking to unearth.

A glimpse into the post-Mueller world

In the short term, Monday's move was yet another sign that even when special counsel Robert Mueller files his report and even if other civil and criminal prosecutions into Trump's past and present life and behavior come to nothing, his troubles are not over.

The potential offenses Democrats are examining are stunning in their breadth. They include alleged corruption, obstruction of justice, hush money payments to women, supposed collusion with Russia and claims that Trump infringed the Constitution by using his office for personal financial gain.

The people who are getting letters asking for documents include Trump's grown sons, Eric and Donald Jr., his son-in-law, Jared Kushner, his transition chairman, Tom Barrack, key members of his campaign team like Steve Bannon, and West Wing officials like former chief of staff Reince Priebus.

One notable figure not on Monday's list was Trump's daughter and White House adviser, Ivanka. Nadler did not explain why, though he told Burnett that it was "quite conceivable" she could be on a future list.

The President predicted the expanded Democratic front this past weekend during his wild speech to the Conservative Political Action Conference, offering a preview of how he will seek to slip the dragnet.

"They don't have anything with Russia. There's no collusion. So now they go and morph into, 'Let's inspect every deal he's ever done. We're going to go into his finances. We're going to check his deals.' These people are sick," Trump said.

On Monday, he took a more tempered approach when asked how he would respond to Nadler, telling reporters: "I cooperate all the time with everybody." By Tuesday, however, he was calling prominent Hill Democrats "stone cold CRAZY" on Twitter and decrying their actions against "innocent people."

The House Judiciary approach is one of an overlapping set of congressional investigations now powering up, also centered in the House Foreign Affairs, Oversight and Intelligence committees.

Those three panels, for instance, asked the State Department on Monday for information on Trump's private meetings and phone calls in his mysterious relationship with Russian President Vladimir Putin.

They also want interpreters who took part in the pair's private chats to be made available for interviews, all but ensuring a showdown with the administration.

Democrats run their own risks

The oversight offensive launched on Monday brings its own risks and consequences, given the significant raising of the stakes. And there is no guarantee that such a grave constitutional process and its unpredictable political reverberations can be contained by Democratic leaders.

If Democrats spend months making Trump's life a misery and turn up nothing impeachable, they risk handing the President a huge political victory he can tout in his re-election effort.

But if they do find evidence that Trump has committed "high crimes and misdemeanors" in attacking core principles of US democracy, they will face an opposite and fateful political choice.

If they fail to take the ultimate sanction against Trump through political timidity, they will have to explain why to grass-roots voters who revile him.

Nadler said his duty to the rule of law, the Constitution and civil rights would help him decide what to do.

There are also practical barriers that Democratic investigations will face.

An investigation that extracts documents from more than 80 witnesses eventually leads to interviews and new leads, could end up with millions of pages of evidence and take many months.

That's one reason why some observers suspect that Democrats are seeking to pursue a process that badly damages Trump, heaps pressure on his White House and lands in the middle of the 2020 campaign -- but does not include the risky political step of impeachment hearings.

Nadler said his list was made up of people and organizations that had already been asked for cooperation by Mueller and other jurisdictions in an effort to avoid contentious court challenges.

But the White House and other agencies are certain to slow-walk the requests and make claims of executive privilege, leading to Democratic subpoenas that could further delay the process by initiating long court battles.

And Republicans who remember the Bill Clinton impeachment battle 20 years ago are certain to portray Democrats as pursuing a vendetta against the President, in an effort to shore up his political support.

There are already GOP claims that the Democrats are launched on an endless investigation in search of a crime in the belief that Mueller will not unearth impeachable offenses in his final report, expected soon.

"We don't even know what the Mueller report says, but Democrats are already hedging their bets," Rep. Doug Collins of Georgia, the top Republican on the Judiciary Committee, said in a statement.

"After recklessly prejudging the President for obstruction, Chairman Nadler is pursuing evidence to back up his conclusion because, as he admits, 'we don't have the facts yet.'"

Trump's unshakable position among Republican voters, which could mitigate large-scale desertions from his party in any Senate impeachment trial, is legendary.

But the potency of the GOP defense has yet to be tested. Almost every day brings a whiff of another scandal or controversy from the Trump White House -- meaning that any proof of wrongdoing found by Democrats could be especially powerful.

A third case of coronavirus has been confirmed in the U.S.