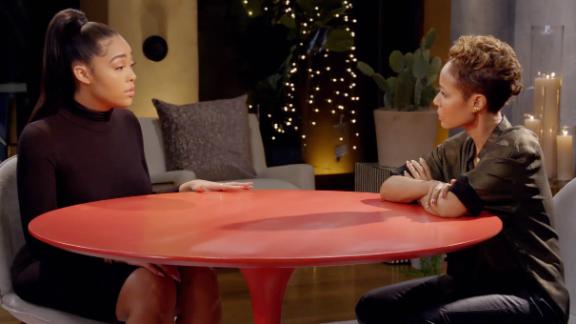 Jordyn Woods denies that she slept with Tristan Thompson, but says she takes responsibility for placing herself in a position that has cost her a relationship with the Kardashian/Jenner family.

"The last thing I wanted to do is be that person," Woods said tearfully during an appearance on "Red Table Talk" that aired Friday. "I'm no home-wrecker."

The model is at the center of a cheating scandal involving longtime reality star Khloe Kardashian and Thompson, who is the father of Khardashian's infant daughter and a pro basketball player.

The whole situation has been even more complicated by the fact that Woods has been best friends with Kardashian's younger sister, makeup mogul Kylie Jenner, for a decade.

It was explained that Pinkett Smith and her movie star husband Will Smith had known Woods her whole life, as her father was the sound engineer on Smith's hit television show, "The Fresh Prince of Bel Air," and the families became friends.

It was actually their son, rapper/singer Jaden Smith, who introduced Woods to Jenner, Pinkett Smith said, so the controversy has affected all of their families.

Smith, who is filming "Bad Boys III," called in prior to the sit-down to offer support to Woods.

"I want you to know that you are supported," he said. "I got you and we got you."

"This world is not going to break you," he added. "We won't allow it."

"There's a family that feels betrayed by you," Pinkett Smith told Woods at the beginning of their chat. "I want to give you the opportunity to tell your truth and I want you to tell it through the lens of what your part has been, because that's the only part you can change."

According to Woods, she and some others ended up back at Thompson's home after dinner and drinks at a bar where they ran into him.

Woods said she didn't think "how I would feel if someone close to me is hanging out at my ex's house or the father of my child" and said that was poor judgment on her part.

She also said Thompson kissed her, with no passion, as she was leaving.

"It was a kiss on the lips, no tongue kiss, no making out," she said. "I don't think he's wrong either because I allowed myself to be in that position."

But she denied reports that she gave Thompson a lap dance or that the pair became intimate.

"I should have gone home after the party, I shouldn't have been there," Woods said. "Never once was I giving him a lap dance, making out with him, sitting on him ... never one did we leave the public area, go to a bedroom."

Kardashian did not appear to buy the story.

She tweeted "Why are you lying @jordynwoods ??"

"If you're going to try and save yourself by going public, INSTEAD OF CALLING ME PRIVATELY TO APOLOGIZE FIRST, at least be HONEST about your story," Khardashian tweeted. "BTW, You ARE the reason my family broke up!"

She also tweeted about Thompson, who made headlines by being spotted with another woman days before Kardashian gave birth last year.

"Tristan is equally to blame but Tristan is the father of my child. Regardless of what he does to me I won't do that to my daughter," Kardashian tweeted Friday. "He has been addressing this situation PRIVATELY. If Tristan were to lie publicly about what conspired,then yes I would address him publicly as well."

Things had been heating up recently since Kardashian liked a tweet slamming Woods.

On Tuesday, Kardashian tweeted: "Hi loves, wanted you to know that I appreciate you!"

"I've been reading your kind words and they really are a blessing to me," Kardashian wrote. "I love you! Thank you Thank you! I'll be back when I'm in the mood to chat with you all. Until then remember to be kind to one another."

CNN has reached out to Woods, Kardashian and Thompson for additional comment.