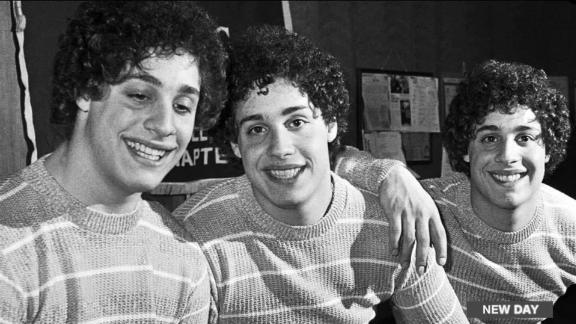 CNN's Alisyn Camerota and John Berman sit down with the brothers featured in "Three Identical Strangers." The movie details what happened to them after they were separated at birth.

Like to ski? Like to splurge? We've got you covered with our guide to a $1 million ski trip. Here's what else you need to know to Start Your Week Smart.

• This is International Holocaust Remembrance Day. It's one of the darkest chapters of human history. But we all can take a moment to hold in our hearts those who were lost and to consider ways to shine a light in today's world.

• NFL's best square off in Pro Bowl. The league's top players (who aren't in next week's Super Bowl) are playing in rainy Orlando; watch on ABC and ESPN. And speaking of the big game, the New England Patriots and the Los Angeles Rams (with an asterisk, some say) arrive in Atlanta.

• Screen Actors Guild Awards takes the stage. Hollywood rolls out another red carpet, this time for performers hoping to take home a bronze statue known as the Actor. The ceremony, hosted by Megan Mullally, starts at 8 p.m. ET on TNT and TBS. Here's what to watch for.

• An army of federal employees heads back to work. After going without pay for 35 days, 800,000 civil servants will be back on the job under a spending bill that reopened shuttered parts of the government through February 15. Meantime, Congress and the White House will keep sparring over President Donald Trump's demand for $5.7 billion for a border wall.

• Denver teachers may strike. For the first time in 25 years, teachers in the Mile High City could take to the picket lines. They've been haggling for 14 months to improve compensation, which union leaders blame for high turnover. Los Angeles educators won key concessions in a strike that ended last week.

• CNN Town Hall features Sen. Kamala Harris. The 2020 race for the White House has begun. Watch as the California Democrat shares her ideas with Iowa's influential voters. The event, hosted by Jake Tapper, airs at 10 p.m. ET on CNN.

• Brexit is up for a vote ... again. Exactly two months before the United Kingdom is due to leave the European Union, Parliament is expected to vote on Prime Minister Theresa May's fallback plan for the departure. Queen Elizabeth II called on Britons to seek "common ground" as fears spread of food shortages if there's no deal.

• Recovery brainstorm heads to Puerto Rico. A two-day conference of the Clinton Global Initiative starts in San Juan. The meeting, focused on disaster recovery, follows a report that says the federal response to Hurricane Maria in Puerto Rico was lopsided compared with storm responses the same year in Florida and Texas.

• Chris Christie has some light reading for you. The in-your-face politician is back, this time with a book, "Let Me Finish," that's said to include "startling insights about Donald Trump from inside the president's inner circle."

• China-US trade war takes the spotlight. China's top trade negotiator comes to Washington for a two-day meeting aimed at reaching a trade truce. It's also the deadline for the US to seek the formal extradition of Meng Wanzhou, chief financial officer of Chinese tech giant Huawei. Some see Meng's arrest in Canada as a political move by the Trump administration to get leverage in the trade feud.

• An Arctic blast heads to the Midwest. The winter's coldest air is forecast to drop from Canada, bringing below-zero highs to cities including Minneapolis and Chicago. The Windy City could see some of its coldest readings in a decade.

• From atop Apple Records ... The Beatles gave their last public performance 50 years ago, winding down when the set was cut short by police. (Click here to listen.)

• What if your little brother broke the internet? "Saturday Night Live" writers offer a pretty good window on the indignities of living adjacent to fame in "The Other Two." It airs weekly at 10:30 p.m. ET on Comedy Central.

• Will Phil see his shadow? It's Groundhog Day, when the world turns its attention to Pennsylvania's Punxsutawney Phil (or Bill Murray). If the critter sees its shadow, we're all in for six more weeks of winter.