Gender reveal parties are destructive from top to bottom 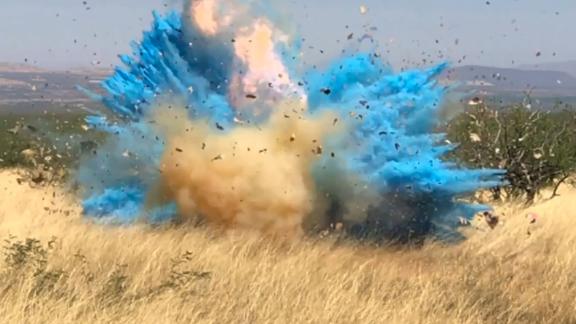 If it weren't already a bad idea to throw a party without proper safety measures during a pandemic, one that sparks a massive forest fire is just arsenic-laced icing on the poison cake. A California family set off a "smoke-generating pyrotechnic device," causing a fire that is raging through the San Bernardino National Forest. The fire has burned thousands of acres, destroyed countless wildlife and may potentially cause a lot more devastation as the uncontrolled fire continues to burn.

Even Jenna Karvunidis, the blogger widely credited with popularizing gender reveal parties, has had enough, writing on Facebook this week: "Stop having these stupid parties. For the love of God, stop burning things down to tell everyone about your kid's penis. No one cares but you."

In a time of sadness, here's another very sad part of this: The disastrous fire in California is far from the only tragedy that's accompanied the relatively new and perpetually harmful trend of holding such parties.

We've seen time and again why this practice is pointless at best and dangerous at worst. An Arizona gender reveal party in 2017, in which the expecting father shot an explosive substance at a target, started a wildfire that destroyed 47,000 acres. He was charged and ordered to repay some $8 million in damages. There goes the kid's college fund (and possibly its home and any semblance of nature to play in).

A gender reveal party in Iowa last year that essentially involved the detonation of a pipe bomb killed a grandmother-to-be. Then there was the guy in 2018 who used his pet alligator to announce the gender of his child by placing a watermelon filled with blue jelly in the creature's mouth, causing a perilous stir and questions about animal abuse.

Even when gender reveal parties don't cause this kind of overt harm, these examples of death and destruction are still an apt metaphor for the detrimental effects of their deeper cultural message. A pyrotechnical display of pink or blue reflects a toxic glee at boxing our babies into binary gender categories that may not reflect who they are. By slapping a color code on our little ones (and plastering it all over the internet) before they even enter the birth canal, we are removing entirely their sense of agency to develop their own gender identities and to control that identity online. We are completely erasing the spectrum of social and biological diversity when it comes to gender.

Those who do not fit into the binary gender categories — whether they are transgender, nonbinary or simply don't fit the stereotypes (I am a perfect example of someone with female genitalia who doesn't feel particularly female and who loathes the color pink, anything frilly, and who will never feel right being addressed as "ma'am") — already face an uphill battle when it comes to navigating the world and finding acceptance and fair treatment. Transgender people are particularly vulnerable to discrimination and violence, and rituals like gender reveal parties only reinforce a system of inequity that marginalizes the trans community.

Emphasizing the importance of gender assignment at the earliest stages of our lives drives home an assertion that everyone is either male or female and that identity is fixed before you are even born and unalterable from that point on. In truth, both sex and gender are complex. We are a sum total of a matrix of internal and external organs, chromosomes, hormones and cranial makeup. The net result is a much more nuanced, diverse and malleable spectrum than the limited two gender categories we cram everyone into.

Perhaps the growing pattern of catastrophes surrounding gender reveal parties is a sign from the universe that parents and families ought not to burden our unborn children with binary gender labels before they've even had a chance to take an actual breath of real air.

Still, if "this might be a sign" doesn't do it for you, remember Karvunidis. She's not just telling people to stop throwing these parties now, she regrets having done so herself — she has compared herself to the "guy who invented gunpowder." Karvunidis, who became famous for inviting friends and family over to unveil a pink cake, has declared that she "didn't know what we know now⁠ — that assigning focus on gender at birth leaves out so much of their potential and talents that have nothing to do with what's between their legs."

Celebrating an impending birth can be a blessing and a joy. Why not throw a "my baby is healthy in the womb reveal party!" or a "I am just so excited to be pregnant that I would like to eat cake and celebrate with my nearest and dearest party!" or a "I am shamelessly asking everyone for gifts again even though I already hit you up for my engagement party, bridal shower, my wedding, and will again for my baby shower party!" There is no viable reason why you need to focus solely on your unborn child's genitalia and share that news with the world through stereotypically assigned colors displayed via confetti, surprise cakes or in the worst-case scenario — fireworks or pyrotechnics.

Leave our gametes, our fetuses, our growing babies alone. Let them develop their secondary sex characteristics before we try to label them. Hell, here's a novel idea: Let our children enter into the physical world and get to know them a bit before we check boxes and point fingers and order color-coded cakes and tell them who they are. We'd be a richer world for it. Plus, we'd prevent some forest fires.

Hundreds of senior neighbors protest against housing management in Bethel