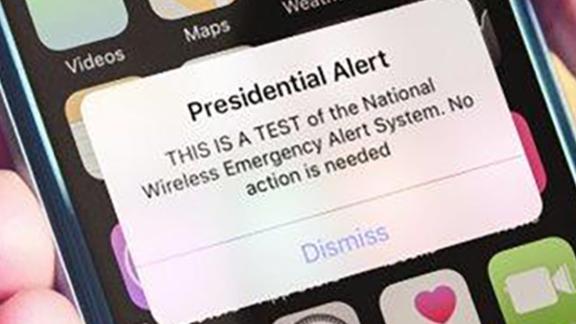 • The US is reeling from two mass shootings. It's happened yet again. Authorities are investigating shootings Saturday and early Sunday in El Paso, Texas, and Dayton, Ohio, that killed a combined 29 people and injured more than 50.

• Protests continue in Hong Kong. Thousands of anti-government, anti-extradition demonstrators have packed the streets in this ninth consecutive weekend of unrest in Hong Kong. Protests started over a now-suspended extradition bill and have evolved to include bigger demands as violence as escalated.

• X Games wraps up. The world's best dominate on skateboard and BMX to round out this season's competition in Minnesota. Tune in at 1 p.m. ET on ABC.

• The House and Senate take August recess. Congress has officially left the building. Lawmakers in both houses are due to return September 9.

• A would-be pipe bomber gets sentenced. The man who told a federal judge that attending a rally for President Donald Trump was "like a newfound drug" is due to learn his fate. Cesar Sayoc pleaded guilty to 65 felony counts in connection with 16 explosive devices he admitted mailing to recipients including Barack Obama, Bill Clinton and CNN.

• 'This is only a test.' Starting at 2:20 p.m. ET, federal agencies are due to conduct a nationwide test of the Emergency Alert System. A message will go to designated radio and TV stations, then all other radio and TV stations, plus cable, wireline and satellite service providers should get and broadcast it, FEMA said. The test is not expected to include a cell phone message via Wireless Emergency Alerts.

• Puerto Rico's new governor faces a key vote. Pedro Pierluisi has been sworn in as the US territory's new chief, but legal questions linger about whether his appointment last week as secretary of state, which set him up to succeed embattled ex-Gov. Ricardo Rosselló, was legit. The island's Senate faces this deadline to vote on it; if lawmakers don't, Pierluisi has said he'll step down.

• Cyntoia Brown walks free. The Tennessee convict whose plight became a cause célèbre is due to restart her life. Then-Gov. Bill Haslam, a Republican, granted clemency to Brown, 31, who was serving a life sentence in the killing of a man who Brown said had solicited her for sex when she was just 16.

• US defense chief visits South Korea. Mark Esper is due to meet his Seoul counterpart as tensions on the peninsula fester following North Korea's launch last week of what experts say were short-range ballistic missiles. The matter is also a focus this week for other world leaders meeting in the region.

• Muslims make a sacred pilgrimage. Hajj is due to begin (depending on the moon's sighting). It's a pillar of Islam that calls for every Muslim who can to make the journey to Mecca at least once in his or her life. The height of Hajj corresponds with the holy day of Eid al-Adha, commemorating Abraham's readiness to sacrifice his son on divine orders.

• Jews mark Tisha B'Av. It's a day of mourning that recalls the destruction of the first and second temples in Jerusalem.